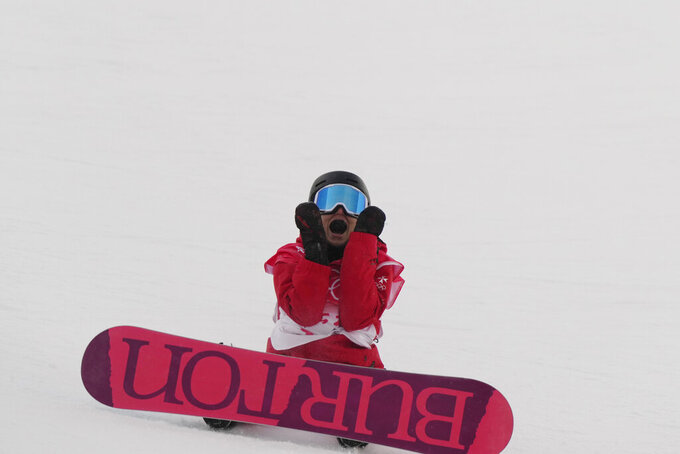 ZHANGJIAKOU, China (AP) — In one way, these Olympics have been just like any of the last six. It was impossible to miss the name “Burton” flying over the halfpipe.

Only at this one, the man who built the board, then stamped his name on the bottom of it, was not present. Jake Burton Carpenter died in 2019, and his absence is being felt at the Beijing Games, the first without him for the sport he created and brought to the masses.

“I mean, basically, none of us would be here without him," American halfpipe rider Tessa Maud said, as tears welled up in her eyes.

That's no exaggeration. Burton Carpenter was an outdoor addict in the late 1970s when he took an invention originally called a “Snurfer” — something like a sled with a lanyard rigged to the front — and decided it could be more. He was convinced he could make a sport out of that contraption.

He started selling snowboards out of his car. The business took time to take hold. One legendary story was about how he went out for a sales trip with 30 snowboards and came back with 35.

“He got rejected over and over and he kept saying, 'I think there’s a (expletive) sport here,'" said Burton's wife, Donna Burton Carpenter, in a 2020 interview.

On Friday, Donna Burton Carpenter spoke with The Associated Press after the men's halfpipe contest, where Japan's Ayumu Hirano finished first and Shaun White ended up fourth in his farewell at the Games. She, too, was not in attendance because of COVID-19 restrictions that have limited the crowds in China.

“It's almost been surreal for me, not to be there,” she said. “Jake's focus was always on the riders. He was their biggest cheerleader. That's been hard.”

After the slow start, the snowboard began catching hold. Burton started publishing an annual catalogue that began with a heartfelt letter from Jake addressed “Dear Rider." That was the name of a documentary about Burton Carpenter that came out last year, retelling the highs and lows of his business and his life.

It was with Burton Carpenter's help, and blessing, that snowboarding became an Olympic sport in 1998. That move met resistance. Burton Carpenter never put pressure on his riders to go. But he always showed up.

White broke into tears Friday as he spoke about him.

“I wish Jake was here,” White said. “He’d probably give me a big hug, tell me how proud he was and say, ‘enough’s enough.'"

Even riders who didn't have a business relationship paid homage this week.

“It was the friendship and the passion he had for the sport. Getting a compliment from Jake Burton was always like a big thing," said Louie Vito, the longtime veteran who returned this year to compete for Italy.

Another big thing about Burton Carpenter — he was fun. His wife said there's certainly no chance her husband would have wanted everyone moping around at the Olympics on his account after the 65-year-old died of complications stemming from testicular cancer.

Still, it was hard not to acknowledge there's something missing this week.

Canadian Brooke D'Hondt said she only met Burton Carpenter once. It changed things for her. As she stood at the bottom waiting for her score in qualifying this week, she pointed to the “Burton” on the bottom of her board.

“I met him at US Open when I was a junior,” she said. “And I’m just so thankful because, like, none of us would be here without him.”