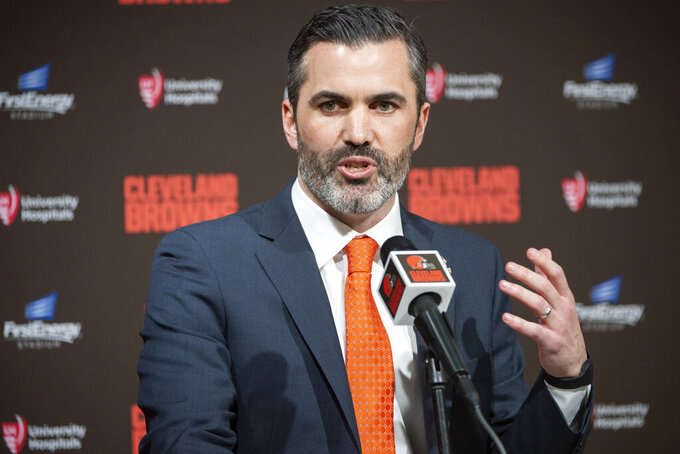 FILE - In this Jan. 14, 2020, file photo, Cleveland Browns NFL football head coach Kevin Stefanski answers a question during a news conference at FirstEnergy Stadium in Cleveland. Cleveland's first-year coach has been holed up with his family and riding out the COVID-19 pandemic outbreak, which has created numerous challenges as he prepares for an NFL season that still remains in question.(AP Photo/Phil Long, File)

Stuck in Minnesota with his family, the Cleveland Browns' first-year coach has been holed up and riding out the coronavirus pandemic, which has created challenges as he prepares for the NFL draft and a season that remains in question.

Stefanski has been pulling out all the stops as a stay-at-home gym teacher — “baseball, bike rides, hitting some plastic golf balls" — to keep his three kids entertained during the most unusual football offseason of his life.

And while Browns quarterback Baker Mayfield has been making his body buff, Stefanski said he's been too busy coaching from afar to notice.

Stefanski, who spent the past 13 seasons as a Vikings assistant, spoke to reporters on Thursday for the first time in weeks. He said his family's planned move to the Cleveland area has been postponed, put on hold like so many other things in the lives of so many people.

“This is definitely testing my parenting skills,” Stefanski said with a chuckle. ”Strange times.”

For now, Stefanski's days are filled with Zoom video conferences and remote planning sessions with his staff and first-time general manager Andrew Berry, whose aggressiveness in free agency has helped the Browns address some major needs.

It's hardly an ideal start for Stefanski, who along with Carolina's Matt Rhule and the Giants' Joe Judge, are the league's only rookie coaches. He's doing all he can to make the most out of a unique situation he's completely powerless to control.

The disruption could be especially hard on a young coach with a young team, but Stefanski is determined not to allow it to alter his plans for the Browns, who fell short of expectations last season.

“You’ve just got to make it work,” Stefanski said. “I don’t look at it from any other perspective than that. I think all 32 teams are at the same disadvantage. It’s a very fluid situation. We are just awaiting word from the league on how they’re going to handle certain things, and then we’ll adapt and adjust accordingly.”

The Browns were scheduled to open their voluntary offseason workout program Monday. But team headquarters in Berea is closed and Stefanski is awaiting word from the league about how much contact he's allowed to have with his players.

"We’re ready for that, but we just don’t know exactly how it’s going to go down.”

Stefanski said the Browns are operating under the assumption that the draft will take place as scheduled from April 23-25. It's possible he'll remain in Minnesota when the team makes its selections. Stefanski insists the lack of player visitations or pro day workouts won't hinder teams.

“We're all in the same exact boat, so I don’t think it’s a disadvantage for anybody then,” he said. "We’ll be ready to go. But is it a unique year? Would we love to have more medical information? Would we love to be able to go out to these pro days? Of course, but we’re dealing with what’s out there. That’s our job to adapt. But I just think because it’s the same for all 32 clubs, I don’t see it as a disadvantage.”

As for Mayfield, Stefanski said he's unaware of the brash QB posting recent photos on social media of his new, chiseled physique. Mayfield was criticized for being out of shape last season, when his regression after a strong rookie year raised questions about whether he was Cleveland's answer going forward.

The Browns' recent signing of veteran Case Keenum led to more speculation about Mayfield, but Stefanski offered his unwavering support.