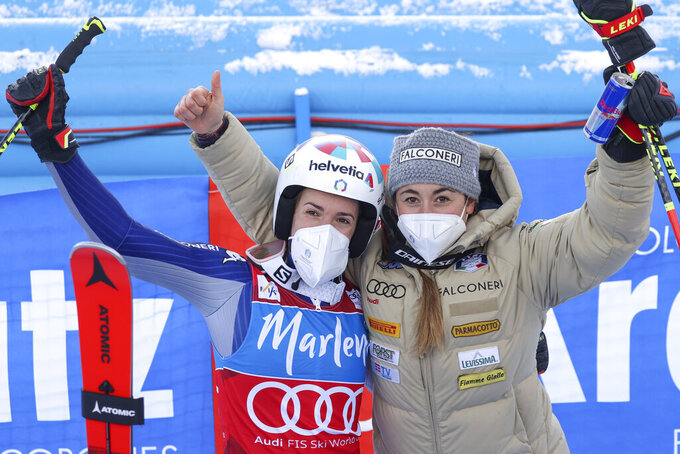 All on the same team.

Sofia Goggia, Federica Brignone and Marta Bassino have won so much recently that the rest of the skiing circuit has taken notice — and not just because of the Italians’ results.

It’s more about how the results have been attained — with a three-woman “elite” squad within Italy’s larger team that means Goggia, Brignone and Bassino train together constantly.

“What I marvel at is how they handle three such different athletes. Making a team work like that is a huge challenge,” said Tina Maze, the retired former overall World Cup winner from Slovenia who used to have her own personal coaching team.

Personal teams have become the norm for the top women on the circuit, with Mikaela Shiffrin, Petra Vlhova and Lara Gut-Behrami each having their own individual coaches, even if they still operate within the broader spectrum of their respective national squads.

“Ours is a team. We don’t have private squads,” said Italian Winter Sports Federation president Flavio Roda. “All of our teams are groups. With Goggia, Brignone and Bassino it’s a small team.

The elite team is in its third season together.

“They’re always together. Always. Sometimes they join up with other groups — other downhillers or other giant slalom skiers — but the three of them always stay together," Roda said. "They work well together.”

While Goggia is out injured for the world championships, Bassino won the parallel on Tuesday and both Bassino and Brignone are among the favorites for Thursday’s giant slalom race.

Bassino dedicated her parallel win to Goggia, who arrived in Cortina on Wednesday to support her teammates.

“I’m here for them,” Goggia said. “Today I had lunch with them.”

“Putting three really high-level athletes together in the same team raises the bar and makes you willing to work harder in training,” Goggia added. “It also helps lighten the mood when you’re working that hard, within that tight circle.”

The elite team is coached by the white-haired Gianluca Rulfi.

“One day, with a laugh, I asked Rulfi, ‘How do you handle us all?’” Goggia said. “He responded, I’m like the man in 'Mission Impossible.’

“At times it’s easy, sometimes less so. Everyone has their own goals and we use each other to improve.”

Brignone was fuming when she was eliminated by Bassino in the parallel race.

“I would bet on her grit and anger inside,” Goggia said. “She sometimes pulls out these nasty, hard-charging runs that very few athletes are capable of.”

Bassino is nicknamed “Dory” after the Disney film character because she’s always so laid back that it sometimes seems like she’s distracted. A former gymnast, the relatively small Bassino makes up for her lack of physical strength with a perfect feel for the snow.

Unusual for a snow-sport athlete, Bassino openly acknowledges that she hates the cold.

Having three standouts on one team also has its drawbacks, like when Goggia fell and injured herself skiing down to the valley while carrying a heavy backpack. That’s something that would never happen to Shiffrin, Vlhova or Gut-Behrami, who have enough staff to carry their equipment.

“Goggia, Brignone and Bassino are the equivalent of skiing diamonds,” said Livio Magoni, the Italian who coaches Vlhova and formerly worked with Maze. “But if they had more support nobody would be able to catch them."

“(Italy) has three stars but at the end of the season, they might not even finish on the overall podium,” Magoni said. “But they’ll win medals here, because they’ve got so many great chances.”