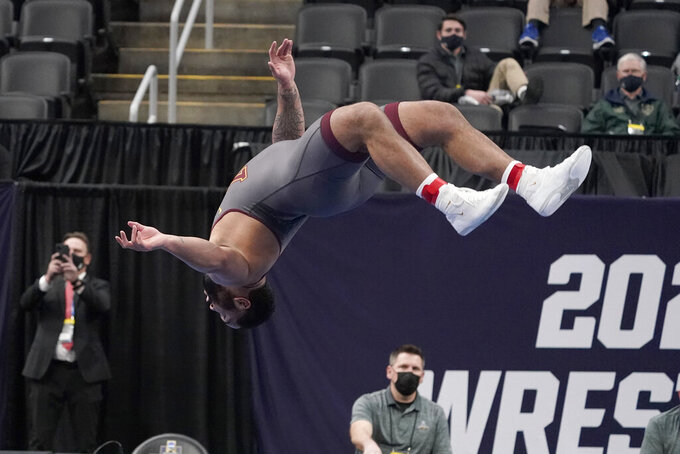 FILE - Minnesota's Gable Steveson does a backflip to celebrate after defeating Michigan's Mason Parris in their 285-pound match in the finals of the NCAA wrestling championships in St. Louis, in this Saturday, March 20, 2021, file photo. The charismatic 21-year-old hopes a successful run at the Games launches him into a WWE career like his mentor, Brock Lesnar, and an acting career like former WWE star Dwayne 'The Rock' Johnson. (AP Photo/Jeff Roberson, File)

Steveson was a national champion as a junior at the University of Minnesota this past season and won the Dan Hodge Award for best college wrestler. The charismatic heavyweight is quite a target for companies -- he has nearly 250,000 followers on Instagram and more than 30,000 on Twitter.

Steveson is among the favorites in the freestyle 125-kilogram weight class at the Tokyo Olympics. The gold medal match will be Aug. 6.

“Being tough and authentic are two trademarks of a Kill Cliff Fight Club Member, and Gable is all that and then some,” Kill Cliff CEO John Timar said in a statement.

Steveson previously had signed with Gopuff, a consumer goods and food delivery service. He also has a marketing agreement with Barstool Sports.