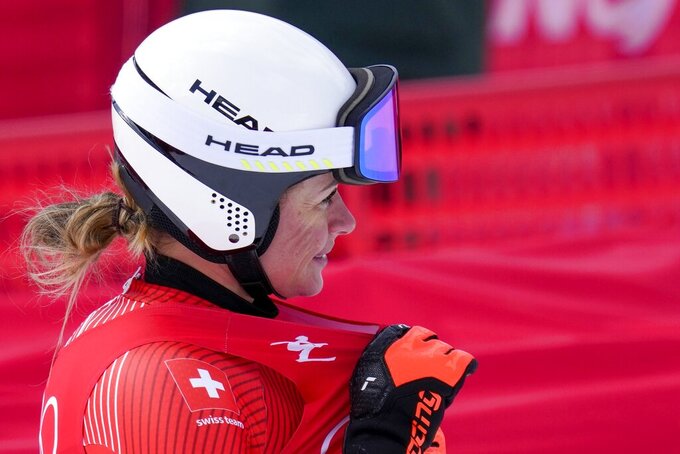 Corinne Suter, of Switzerland, celebrates after finishing the women's downhill at the 2022 Winter Olympics, Tuesday, Feb. 15, 2022, in the Yanqing district of Beijing. (AP Photo/Luca Bruno)

BEIJING (AP) — What better way to prepare for an Olympic downhill race than by watching Lindsey Vonn.

Swiss skier Corinne Suter checked out some old videos of the sport’s most successful downhiller before her run at the Beijing Games on Tuesday and then went out and won gold — making her the first woman since Vonn in 2010 to hold the Olympic and world championship titles in the sport’s fastest and most dangerous discipline at the same time.

“She’s my biggest idol,” Suter said, adding that she watches old runs from Vonn “all the time.”

When Suter raced in Val d’Isere, France, she pulled up Vonn’s runs at the French resort. For this race, she viewed some of Vonn’s training runs.

“I just like how she skis with her body and how aggressive she’s doing the turns,” Suter said of Vonn, the 2010 Olympic champion whose 43 World Cup downhills are the most ever by a man or woman. “I just watch sometimes the turns.”

Three years ago, Suter could examine Vonn up close when she took silver in the world championship downhill in Are, Sweden, while Vonn took bronze in the final race of her career.

Like Vonn, Suter is powerfully built and she handled the high-speed turns on a course known as The Rock better than anyone else to beat defending champion Sofia Goggia by 0.16 seconds.

Goggia skied two spots before Suter and when she came down into the lead, it meant that three Italians were occupying the podium positions: Goggia, eventual bronze medalist Nadia Delago and Elena Curtoni, who eventually finished fifth.

Just before Suter’s run, the cameras flashed to Italian coach Michael “Much” Mair, who started crossing his arms as if to say, “Stop the race now!”

Suter was faster than Goggia through the first three checkpoints but trailed the Italian by 0.18 seconds at the final check before making time up through the flatter canyon section into the finishing jump.

And while the Italians still celebrated a big day — especially considering that Goggia injured her left knee and leg in a crash last month — it was the Swiss team celebrating the biggest honors again.

“We’re all athletes who have won a lot over the last seasons,” said Gut-Behrami, who finished 16th. “I don’t think it’s anything (surprising). ... The level is so high that there’s a battle just to qualify.”

Joana Haehlen, another Swiss skier, finished sixth after leading the final training session a day earlier to secure one of the four starting spots on the team.

“I had no expectation at all, because I didn’t even know if I could race or not,” Haehlen said. “It’s crazy. It’s an honor to be in the team.”

The downhill course at the Yanqing National Alpine Skiing Center was designed by 1972 Olympic downhill champion Bernhard Russi, who is from — where else? — Switzerland.

Has the impact of Russi, who works for the Switzerland-based International Ski Federation, played a role in the Swiss team’s success in China?

“I don’t think so,” Haehlen said. But then she added: “I think the Swiss are really good when it’s technical. For us on the speed side, I think that helped.”

Suter injured both of her knees in a training crash in September, was on crutches for a month and didn’t fully regain her form until she won the final World Cup downhill before the Olympics in Garmisch-Partenkirchen, Germany.

The last time Switzerland swept gold in the men’s and women’s downhills at the Olympics was 50 years ago when Marie-Theres Nadig took the women’s title to go with Russi’s victory. This time, there was also a Swiss sweep of the women’s speed events.

“Everyone is super fast,” Suter said, “and we can push each other to the limit.”

Almost as fast as Vonn.