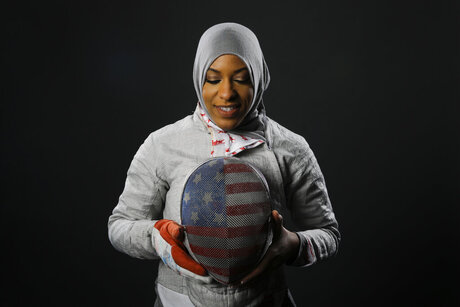 By: LUKE MEREDITH (AP)
Copyright 2020 The Associated Press. All rights reserved. This material may not be published, broadcast, rewritten or redistributed.

In Ibtihaj Muhammad, fencing might have finally found an athlete whose story transcends the sport.

Muhammad will make history at the Rio Games by becoming the first American athlete to wear a hijab — a Muslim head scarf — while competing in the Olympics.

Muhammad's Olympic goal — beyond winning a medal, of course — is to be a positive role model for the Muslim-American community. Muhammad is well on her way to doing so, recently earning a spot on Time's 100 Most Influential People of 2016 list.

"I've been in this sport for a pretty long time — at this point I feel like I've kind of created a name for myself. If anything, I think the wonderful thing is that now these young kids, they see Muslim women involved in sports. So it's not an anomaly anymore," Muhammad said at the Team USA media summit Los Angeles in March.

But Muhammad is hardly the only American poised for a breakout in Rio.

The U.S. might be as strong as it's ever been ahead of an Olympics — and the fact that this year's Games will be broadcast live in the Eastern time zone should only help fencing's growth domestically.

The Americans and Russians caught some bad luck because two of their top teams — men's sabre and women's foil — won't compete in Rio because the IOC only has room for 10 of the sport's 12 divisions during the Olympics. But those athletes will still compete as individuals.

Here are some of the key story lines to follow during this year's Olympic fencing tournament.

The U.S., France and Italy have three teams ranked in the top three in their weapon in the most recent FIE rankings, trailing only Russia's four.

The Americans haven't won a gold medal in men's Olympic fencing since Albertson Van Zo Post in 1904. But Alexander Massialas, the son of former national team coach Greg Massialas, is ranked No. 1 in the world in men's foil. Gerek Meinhardt and Race Imboden — who's also a fashion model — also owned top-five spots in that weapon as June 18.

Daryl Homer and Eli Dershwitz are ranked 10th and 11th in men's sabre, well within striking distance of a medal.

Two-time Olympic gold medalist Mariel Zagunis is a medal favorite in women's sabre, and Muhammad (10th, sabre) might be peaking just when she needs to. Lee Kiefer took a year off from her studies at Notre Dame to focus on Rio, and she's ranked third in foil.

Arianna Errigo is the new face of Italian fencing after Valentina Vezzali, a six-time Olympic champion, failed to qualify for Rio.

Errigo, who lost to teammate Elisa Di Francisca 12-11 in the gold medal match in London, went on to win world championships in 2013-14 and is currently ranked No. 1 in foil. Errigo's 270 points earned so far in 2016 are the most of any individual fencer.

Sophia Velikaya of Russia (sabre) was also a runner-up in London who has since ascended atop the world rankings, one spot ahead of Zagunis.

Top-ranked Anqi Xu of China will seek her first world championship in epee.

Ruben Limardo, Venezuela's flag bearer for Rio, will be asked to bear the weight of a continent's worth of pressure as South America's best hope for a fencing medal. But the favorite in Limardo's weapon, Gauthier Grumier, has led France to five team epee world titles and is desperate to claim Olympic gold as an individual.

Japan's Yuki Ota and James Andrew-Davis of Great Britain are the biggest threats the U.S. will likely face in foil.

Russia's Alexey Yakimenko is ranked No. 1 in sabre on the strength of a strong end to 2015. But South Korea's Kim Jung-hwan recently won a Grand Prix in Moscow and looks primed for a run at gold in Rio.

The biggest change fans will noticed from London in 2012 to Rio is the shift in the piste, or fighting strip, from parallel to angled.

The venue in London only allowed fans to view from two sides of the arena. But with seats circling all of Carioca Arena 3, spectators should have a much clearer and more dimensional view of the matches. There will also be a family-friendly area just outside the venue, where passers-by will be able to grab a weapon and give fencing a try free of charge. Coaches will be on hand to provide instructions, and safety equipment will be provided.