Home » Brazil » Coach: Lone Russian in track and field focused on herself 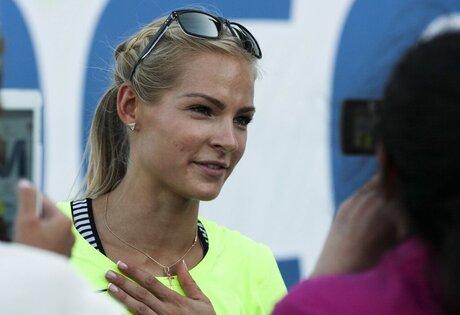 By: EDDIE PELLS (AP), PAT GRAHAM (AP)
RIO DE JANEIROCopyright 2020 The Associated Press. All rights reserved. This material may not be published, broadcast, rewritten or redistributed.
-22.9028-43.2075

RIO DE JANEIRO (AP) — Only one Russian will compete at the Olympic track and field meet.

Darya Klishina's goal is to not put the weight of her whole country on her shoulders.

The coach of the Russian long jumper, who trains and has been drug tested in Florida for the past 2 1/2 years, says part of the preparation involves shielding her from the real-world politics that surround Klishina's presence at the track in Rio de Janeiro next week.

"She certainly is aware of it," Loren Seagrave told The Associated Press in the lead-up to Klishina's competition, which starts next Tuesday. "She's real good at being Darya Klishina, and not taking on the entire world on her own."

In June, track's governing body, the IAAF, banned the Russian team from the Olympics after an investigation revealed a culture of widespread, state-sponsored doping within the program. It permitted exceptions for Russians who could show they had abided by stringent anti-doping rules — namely, those who lived, trained and tested in another country.

Klishina was the only athlete who met the standards. She started training with Seagrave in late 2013 and moved to Bradenton, Florida, in early 2014. The U.S. Anti-Doping Agency, which handles drug testing of any athlete living in the United States, regardless of nationality, has tested Klishina's blood or urine 33 times since the end of 2013, Seagrave said.

Klishina's entry into the Olympics brought its share of criticism from back home, from fans and athletes who suggested she is a traitor. There are 67 Russian track and field athletes who will not be allowed to compete, including two of the country's best-known names — world-record-holder pole vaulter Yelena Isinbayeva and 110-meter hurdles world champion Sergei Shubenkov.

But Klishina will be there. The 25-year-old, whose best finish in a major competition was seventh at both the 2011 and 2013 world championships, is not doing interviews in advance of her competition. When she was cleared to compete, she told the Russian track team's website, "I think it is wrong to criticize me and call me a Russian traitor."

"I would like to point out that I didn't start training in the USA with an American coach a month before this situation turned out the way it did," she said. "I have been there for three years."

Klishina has also received support from athletes, both from Russians who've been banned, and from athletes outside the country. The defending Olympic champion on the men's side, Britain's Greg Rutherford, understands Klishina's awkward role in these games and says she certainly deserves to be here.

"You always like to believe the best in people and I just hope she has a fantastic games," Rutherford said. "It is going to be a very interesting event having her there."

Seagrave said he connected with Klishina after the long jumper reached out, upset that she was stagnating and needed to make some changes.

"When they first told me that Darya was going to come and train with us for a few months, I thought, 'Oh my gosh, I'm going to have to deal with a diva,'" Seagrave said of Klishina, who also dabbles in modeling. "It's absolutely 100 percent the opposite way. She's great to work with, really compassionate, supports her teammates. They support her."

Klishina has the talent to be in the mix for a medal — she won the world youth title in 2007 and had one of this season's top jumps (6.84 meters) at Russia's national championships. But it is not considered an "official" mark since the IAAF isn't recognizing marks from meets in Russia this year.

"She's focused," Seagrave said. "This is one of the things that has allowed her to prepare: We really haven't talked about it much. We felt we needed to act as if everything was going to move forward, based on the decisions she made the last three years. That's one of the things that's allowed her to stay focused and try to build a little bit of insulation between what's going on and her preparation."

But there are some things Seagrave can't shield her from — namely, dreams of a medal.

"I would think it would be a real source of pride and a rallying point for Russian people to realize that they have an athlete that has done everything according to the book and still come out on top," Seagrave said.