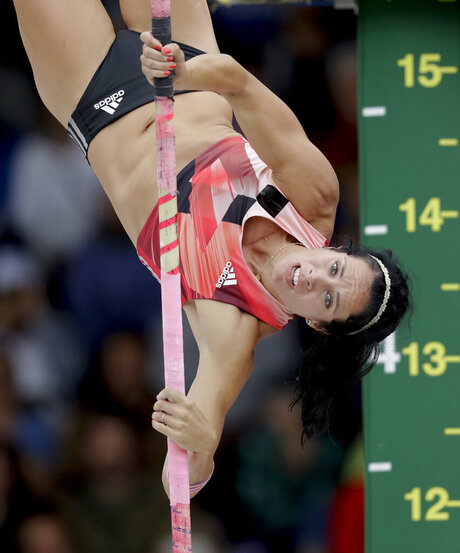 By: EDDIE PELLS (AP)
RIO DE JANEIROCopyright 2020 The Associated Press. All rights reserved. This material may not be published, broadcast, rewritten or redistributed.
-22.9028-43.2075

The highly ranked Brazilian is gone.

Another Olympic pole vault gold medal should be a sure thing for defending champion Jenn Suhr, right?

It's never that easy.

Suhr qualified for the finals of her event Tuesday, but only after fighting through dizziness, chills and a fever — all part of a virus she caught the day after she landed in Brazil.

"Today is probably the worst I've felt," raspy-voiced Suhr said, after clearing 4.60 meters in qualifying, then high-tailing it off the field to start hydrating again. "I can deal with the respiratory. It's the dizziness and always feeling like when I have to cough, like I'm going to throw up. It's just a battle right now."

If that wasn't off-putting enough, Suhr was competing in the same qualifying group as Brazil's Fabiana Murer, who was expected to get in the mix for the country's second pole vault medal, following Thiago Braz da Silva's gold in the men's jumps the previous night.

But Murer failed to clear a height and was out early. A jarring occurrence that took another of Suhr's top challengers out of the mix, but also served as a reminder of how fickle the event can be.

Suhr's top challenger was supposed to be Yelena Isinbayeva, the world-record holder who has been banned from the games, along with 66 other Russians, because of a doping investigation. Suhr has said that she'd want to compete against the best.

"I've got my own problems," Suhr said. "I don't really follow anything, honestly. As you can see, dealing with myself is hard enough."