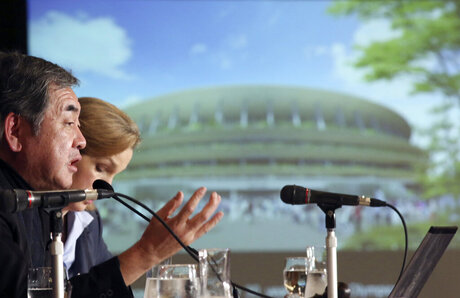 By: MARI YAMAGUCHI (AP)
TOKYOCopyright 2020 The Associated Press. All rights reserved. This material may not be published, broadcast, rewritten or redistributed.
35.6895139.692

TOKYO (AP) — The Japanese government approved a 150 billion yen ($1.5 billion) contract Friday to build a new main stadium for the 2020 Tokyo Olympics, a project that has been delayed by more than a year.

Officials said the stadium construction would begin in December after an earlier plan was scrapped because of spiraling costs and an unpopular design.

The Japan Sport Council, a government-funded organization operating the project, said the stadium was scheduled for completion at the end of November 2019, still five months behind schedule. The delay forced a venue change for the Rugby World Cup that Japan is also hosting in 2019.

The cost of an earlier design by the late Iraqi-British architect Zaha Hadid had risen to 265 billion yen ($2.65 billion), more than twice the initial forecast.

The 150 billion ($1.5 billion) contract is just below the 155 billion ($1.55 billion) ceiling set this time for the contractors, a joint venture among Taisei Corp., Azusa Sekkei Co. and the office of Kengo Kuma, an architect who designed the new stadium.

Tokyo Governor Yuriko Koike said she would closely monitor the expensive project that the city is also part-funding.

"For the burden we have to share, I will ensure it's utilized for the people of Tokyo, and raise my voice when necessary," she said.

A sports ministry panel is discussing how best the stadium can be used after the Tokyo Games.

The stadium delay is part of Japan's troubled preparations for the Olympics, underscoring a widespread lack of cost-control. The Japanese organizers have also faced a bribery scandal. They are now also bracing for a possible delay in the construction of roads linking the main Olympic venues near a new fish market project, which has been hit by a construction scandal and tainted underground water.

The Tokyo metropolitan government is currently reviewing the ballooning cost because of concern about its financial burden and the impact on Tokyo taxpayers.

The city-appointed panel of outside experts warned in a report Thursday that the total cost could exceed 3 trillion yen ($30 billion) without a drastic cost-cutting effort, and suggested using existing facilities instead of building new ones that could likely end up as white elephants.

Find her work also at: http://bigstory.ap.org/content/mari-yamaguchi

By: MARI YAMAGUCHI (AP)
TOKYOCopyright 2020 The Associated Press. All rights reserved. This material may not be published, broadcast, rewritten or redistributed.
35.6895139.692
Advertisement