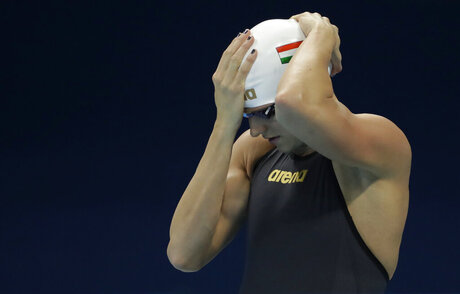 By: PABLO GORONDI (AP)
BUDAPEST, HungaryCopyright 2020 The Associated Press. All rights reserved. This material may not be published, broadcast, rewritten or redistributed.
47.49819.0399

The federation rejected her claims.

Hosszu, coached by American husband Shane Tusup, has clashed with Hungarian officials before. In the latest criticism, she wrote on her Facebook page that federation president Tamas Gyarfas is Hungarian swimming's "most harmful factor" and rejected his comments that everything was fine between them.

"Tamas Gyarfas was the first one who said in 2008 that I should quit swimming and retire," said the 27-year-old Hosszu. "If it was up to him, Hungary would have returned from the Rio Olympics with three fewer gold medals and one less silver medal."

Hosszu also faulted the federation for taking undue credit for the results of Hungarian swimmers; said the organization's decision-making process was undemocratic; and implied that financial pressures were involved in the election of its leadership.

"They are working to have people believe that there is no life outside the system," Hosszu wrote. "This is simply laughable. I myself am the living example that there is life after the Hungarian Swimming Federation. In fact, that's when there really is (life)."

In a lengthy reply to Hosszu, the federation said it was "baffled" by her comments, adding that officials had been unable to have substantive talks with her since October 2015, when they said their relationship deteriorated after Hosszu declined to take part in a promotional video.

"The federation's leadership ... is baffled by Katinka Hosszu's latest comments," the federation said, while praising her results and denying that Gyarfas had told her to quit in 2008. "The accusations in her serious criticism are equally unfounded."

While calling it "a gift of fate" that Hosszu and Tusup had met, the federation said swimming officials and competition organizers were increasingly critical of Tusup's behavior, with most clashes occurring due to financial conflicts.

"Professionalism is fully recognized in the sporting world, but Shane Tusup's behavior and style have become increasingly unacceptable in world swimming," the federation said.

Hosszu won three gold medals and a silver medal at the Rio de Janeiro Olympics in August, holds several world records in individual medleys and was named FINA female swimmer of the year in 2014 and 2015.