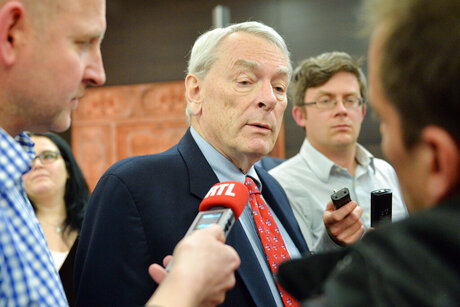 By: EDDIE PELLS (AP)
DENVERCopyright 2020 The Associated Press. All rights reserved. This material may not be published, broadcast, rewritten or redistributed.
39.7392-104.985

DENVER (AP) — The head of the U.S. Anti-Doping Agency is baffled over how a report about the Russian track scandal could stop short of declaring track's governing body noncompliant with the world's anti-doping code.

"No entity can possibly be code compliant if your sport leaders extort athletes to cover up doping," U.S. Anti-Doping Agency CEO Travis Tygart told The Associated Press on Thursday, hours after the report was made public.

Part of the report, authored by International Olympic Committee member Dick Pound, focused on fraud committed by top leaders of the IAAF, including its former president, Lamine Diack. The report says one of Diack's lawyers was involved in an extortion scheme against Russian marathoner Liliya Shobukhova, who paid more than $500,000 to have a doping case covered up, then got reimbursed after she was banned despite the bribe.

The World Anti-Doping Agency commissioned Pound to investigate track's anti-doping operation and the Russian track team. His first report detailed corruption inside the Russian track team and also alleged that doping in Russia was state sponsored. The second report focused more on the IAAF. The report called for a number of reforms inside the organization but also said it "was among the most active antidoping organizations in the field," when it came to testing for blood booster EPO and adopting biological passports to catch drug cheats.

Joseph de Pencier, the CEO of the Institute of National Anti-Doping Organizations, called the report "absolutely stomach-turning," and said Pound's conclusions were not necessarily the last word on the IAAF.

A WADA compliance committee and a separate executive committee also have a chance to review the report and make recommendations. WADA's foundation board has ultimate authority on declaring an organization noncompliant.

"This part of the story hasn't played out entirely," de Pencier said. "I'm sure there's work to be done to start that assessment."

Leaders in both iNADO and USADA have called for the Russian track team to be banned from the Olympics. Tygart said nothing he read in Thursday's report changed his mind.

"To those who value clean sport, knowing the months before a major competition are the critical months to have a robust anti-doping program, I don't think it can be done," he said. "Even if you wipe away all those who were directly involved and hold them accountable, the system's not anywhere near close to being where it must be."

Pound has previously said there was plenty of time for the Russian track team to comply with a long list of IAAF demands and be reinstated before the games in August. Pressed on the issue Thursday, he made no predictions.

"I was confident in November, even in September, that if Russia wanted to address this problem, it could get back in," Pound said. "Whether it can do so, I don't know. I'm not in possession of further facts."