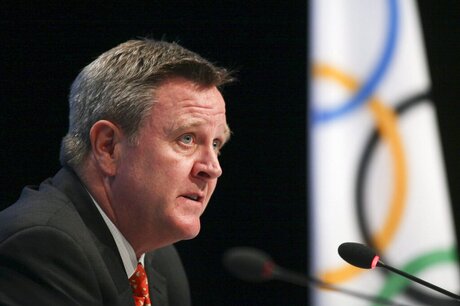 The leader of the U.S. Olympic Committee says the latest anti-doping headlines make it "increasingly difficult to defend the current system."

In a wide-ranging interview Friday with The Associated Press, USOC CEO Scott Blackmun spoke about America's preparation for the Rio de Janeiro Games — plans being jarred by ongoing concerns about the Zika virus, along with a growing feeling among U.S. athletes that not everybody will be on a level playing field when the Olympics start in August.

In his first comments on the anti-doping crisis, Blackmun said "it is increasingly difficult to defend the current system following a breakdown of this magnitude."

"If the recently reported allegations prove to be true, we need to admit that the system is flawed," he said. "We need to fix it, and we need to find a way to assure the athletes in Rio that they are competing on a fair and level playing field."

Last week, The New York Times published a story detailing former Moscow lab director Grigory Rodchenkov's elaborate plans to ensure drug-using Russian athletes would not test positive at the Sochi Olympics by replacing their dirty urine samples with clean ones previously collected. The World Anti-Doping Agency has appointed a commission to look into the allegations.

A different commission released a report last year detailing a state-sponsored doping system inside Russia used to benefit its track team. That report led to the suspension of the team along with the country's anti-doping agency and the Moscow anti-doping lab that Rodchenkov headed. The track team's fate for Rio will be decided next month by the sport's governing body, the IAAF.

At a WADA meeting last week, officials reported that because the Russian anti-doping agency was taken over by independent managers, testing in the country has decreased by more than two-thirds, with doping-control agents being harassed in some cities and the Russian government often balking at paying bills to run the revamped agency.

The cascade of reports has led athletes and other anti-doping authorities to call on WADA and the International Olympic Committee to act more decisively to clean up an Olympic movement that, in many ways, looks as drug-addled as ever.

With the Olympics less than three months away, and already swamped by a steady flow of emails from athletes and others, Blackmun decided to speak out, as well.

"As a global sporting community, we need to embrace the opportunity to shine a light on the bad actors who are responsible for the wrongdoing and corruption," he said. "We are at a defining moment for international sport. It is time for strong leadership and decisive action. Doping is a problem all around the world, not just in Russia."

Among those weighing in after reading Blackmun's comments was Sarah Konrad, an Olympic biathlete and cross-country skier who is chair of the USOC athletes' advisory council.

"Well done, Scott Blackmun!" Konrad said in an email to AP. "It is great to know that we, as U.S. athletes, have the support of our leadership."

The USOC is supporting moves by individual sports to adjust plans because of Zika-related concerns. On Thursday, the AP reported the U.S. swim team has moved a pre-Olympic training camp out of Puerto Rico because of Zika.

But Blackmun said scientists' calls to cancel the Olympics "is an overreaction to a problem that is, admittedly, serious. Based on information we currently have, none of the health authorities are calling for Games to be canceled."

The Los Angeles bid for the 2024 Olympics is on track, he said. Along with Paris, Los Angeles looks like a front-runner in a four-city contest that also includes Rome and Budapest. While encouraged about the overall plan, Blackmun conceded "the challenge with any competition like this is, it's a campaign, and you never really know what people are thinking."

As for the upcoming Olympics, he said the USOC's goal is "to make sure we improve on our performance from Games to Games."

The U.S. won 103 medals in London, which led the world but was still a decrease from the 110 it took at the Beijing Games.

"We would like to have the peace of mind at the end of the game that we did everything we could for every American who had a chance to win the medals," Blackmun said.