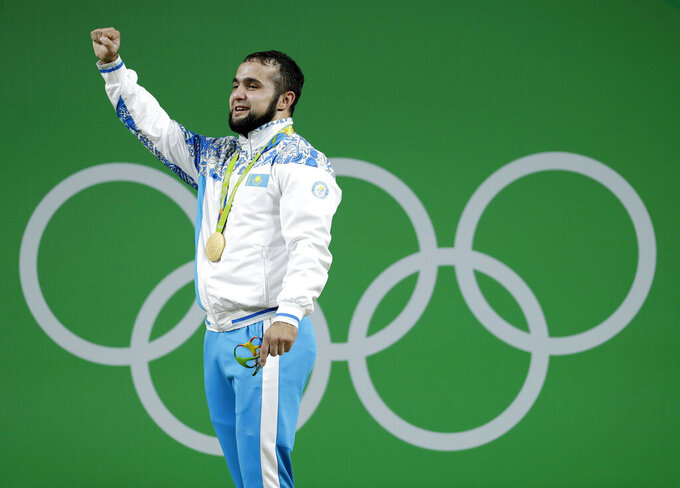 FILE - Nijat Rahimov, of Kazakhstan, acknowledges the applause after receiving his gold medal for the men's 77kg weightlifting competition at the 2016 Summer Olympics in Rio de Janeiro, Brazil, Aug. 10, 2016. Rahimov has been stripped of his 2016 title for doping and banned for eight years, it was announced Tuesday, March 22 2022. The Court of Arbitration for Sport says the Kazakh lifter was guilty of “four urine substitutions.” (AP Photo/Mike Groll, file)

LAUSANNE, Switzerland (AP) — Olympic weightlifting champion Nijat Rahimov was stripped of his 2016 gold medal and banned for eight years for doping on Tuesday.

The Court of Arbitration for Sport said the Kazakh lifter was guilty of “four urine substitutions” and disqualified from all his results since March 2016.

Rahimov's world record at the 2016 Rio de Janeiro Olympics was controversial even at the time. It came one year after he served a previous ban for doping while competing for Azerbaijan.

His integrity was publicly doubted by rival Mohamed Mahmoud of Egypt, who took the bronze medal in the 77-kilogram class.

“Maybe after some doping controls, some things will change,” Mahmoud said in Rio.

Mahmoud is now in line to get the silver medal with Chinese great Lyu Xiaojun likely to be upgraded to become a three-time Olympic champion.

Lyu became the oldest men's Olympic champion in weightlifting last year in Tokyo by winning the 81-kilogram class at the age of 37.

Rahimov was eventually caught as part of the “Operation Arrow” investigation by the World Anti-Doping Agency. The investigation began after German broadcaster ARD detailed widespread doping and corruption issues in the sport and the International Weightlifting Federation.

CAS said Rahimov will be banned until January 2029. He can challenge the verdict at the CAS appeal division.