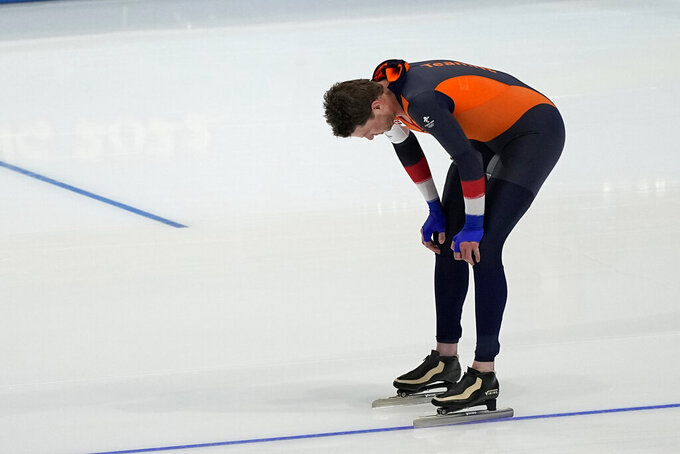 Sven Kramer of the Netherlands reacts after his heat in the men's speedskating 5,000-meter race at the 2022 Winter Olympics, Sunday, Feb. 6, 2022, in Beijing. (AP Photo/Ashley Landis)

BEIJING (AP) — Sven Kramer’s best shots at adding to his pile of nine Olympic medals are still ahead of him in Beijing.

The most decorated male speedskater in Olympic history came up short in his signature event on Sunday, finishing ninth in the 5,000 meters. The Dutchman won it at the last three Winter Games and was second in 2006.

Kramer skated 12 1/2 laps in 6 minutes, 17.04 seconds in the first of 10 pairings at the Ice Ribbon. He received a smattering of applause from the small crowd in an acknowledgement of the last individual Olympic race of his career.

“I expected much better, but I didn’t feel well today,” he said.

Kramer hasn't been his usual dominant self in the 5,000 this season. He finished third at the Dutch trials and was chosen by his country's federation to compete in his fifth Olympics because of his value in the team pursuit and mass start.

“My main goal is to win gold in the team pursuit, because in the end I skate to win,” he said. “It would be amazing if I could win the fifth Olympic title of my career during these Games. Therefore, the team pursuit has become more important for me.”

Only countrywoman Ireen Wüst has more speedskating medals than Kramer with 11. He and Claudia Pechstein of Germany are tied with nine apiece.

Kramer might have already had as many medals as Wüst if not for some misfortune along the way. As a teenager at his first Olympics in 2006, the Dutch were leading their semifinal in the team pursuit when late in the race Kramer fell on a corner. He took his team's chances down with him and Italy advanced.

In 2010, Kramer finished first in the grueling 10,000. He was disqualified when he incorrectly changed lanes during a lap, the result of wrong directions shouted by his coach late in the race.

The 35-year-old from the sport's hotbed of Heerenveen, Netherlands, already had said he would retire this year. He became a father three years ago.

Kramer began his own school in 2020, with the goal of encouraging children and adults to start skating. He eventually would like to have multiple locations around the country.

“I don’t see myself as a coach, but I like to inspire kids and try to give them something back,” he said. “It’s a big tradition and it’s part of our culture in Holland. With our academy, we’re trying to keep that.”