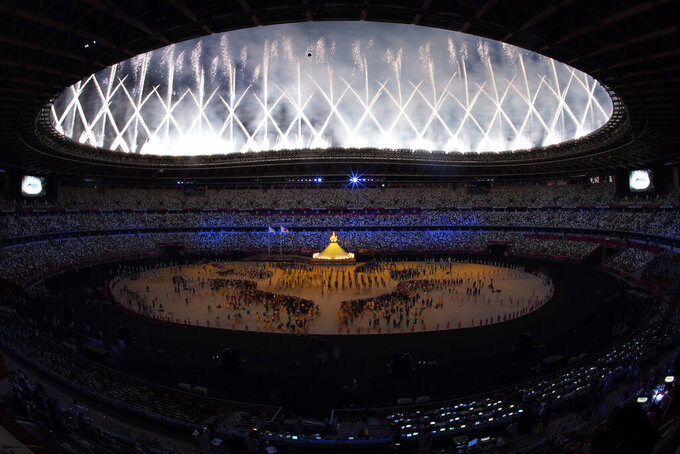 FILE - The Olympic flame burns as fireworks explode during the opening ceremony in the Olympic Stadium at the 2020 Summer Olympics, Friday, July 23, 2021, in Tokyo, Japan. Creative director Marco Balich, reveals to The Associated Press that he has been working for a year on a 30-minute show that will run ahead of the World Cup 2022 opening game between Qatar and Ecuador. He says local organizers "wanted to create a real show, which FIFA is not accustomed to.” (AP Photo/Charlie Riedel, File)

Now add “first World Cup with an Olympics-style opening ceremony” to the list of novelties for the tournament in Qatar beginning on Sunday.

Creative director Marco Balich, a veteran of multiple Olympic opening and closing ceremonies, told The Associated Press that he has been working for a year on a 30-minute show that will run ahead of the opening game between Qatar and Ecuador.

“The supreme committee wanted to create a real show, which FIFA is not accustomed to,” Balich said in a phone interview from Doha, referring to Qatar’s local organizing committee.

The extravagant ceremony was one of the reasons why in August the World Cup start was moved up a day in a late switch — to give the show a more prominent viewing slot.

“FIFA and the supreme committee — especially FIFA — realized how much effort was going into creating the ceremony and creating for the first time something that’s not just someone singing before the opening game,” Balich said.

One of the few details many fans remember from previous World Cup opening ceremonies was Diana Ross missing a penalty kick in 1994 during a song-and-dance act in Chicago.

Balich is promising much more substance in Qatar, indicating that concerns over the treatment of migrant workers, human rights and the conservative country’s handling of gays and lesbians will be addressed during the ceremony.

“I can’t spoil the surprise but there will definitely be attention given and responses to all of the issues being debated right now,” Balich said. “It’s not about pleasing the West but being the platform on which Asia and the Western world can comfortably meet. … I think you’ll have answers to all of the criticism and issues that have been raised."

Balich, who is Italian, began his Olympic experience at the 2002 Salt Lake City Games with the flag handover ceremony to Turin.

Unlike the full ceremonies that he created for the 2006, 2014, 2016 and 2020 Olympics in Turin, Sochi, Rio de Janeiro and Tokyo, respectively, Balich was given strict instructions for this event by Qatar’s ruling emir, Sheikh Tamim bin Hamad Al Thani.

“The message and content of this show were curated personally by the country’s leadership,” said Balich, who is working with co-artistic director Akhmed Al Baker. “They want to talk about multiculturalism, accepting diversity and being a platform for peace.”

Sheikh Hamad has been an International Olympic Committee (IOC) member for two decades and sat through many of Balich’s ceremonies. So it’s not surprising that the emir wants an Olympic-style production.

The ceremony — and tournament in general — is also an audition for Doha’s desire to host a Summer Olympics.

Doha has expressed interest in bidding for the Olympics three times but has so far been unable to get onto the candidate list.

Qatari officials were left blindsided last year when the IOC gave Brisbane exclusive bidding rights and then awarded the 2032 Games to the Australian city.

The next available Summer Games is 2036.

Doha has been awarded the 2030 Asian Games.

While the ceremony budget doesn’t come near that of an Olympic opener — mostly because of the difference in length, with Olympic ceremonies usually lasting hours with the parade of athletes and all sorts of protocols — Balich said Qatar "wasn't afraid to invest in artistic quality.

“We have a team of 900 people with best-in-the-world choreographers and lighting technicians,” Balich added. “I think it’s going to be a big step forward in terms of World Cup history, and the next edition in the United States, Mexico and Canada will inherit the challenge to create this big show which enriches the experience and identity of the entire tournament.”

NOT A SUPER BOWL

While Balich is still restricted from revealing details of the show’s content, he did say that “famous actors and artists” will be involved.

Among the confirmed performers at the ceremony is K-pop star Jungkook.

The ceremony and opening game are slated for the tent-shaped Al Bayt Stadium, which has a capacity of 60,000.

Balich is also directing a closing ceremony before the World Cup final on Dec. 18 that he said will be "less important in terms of content.

“It will be more a celebration of the tournament with the realization that the focus for the final is nearly always on the two teams taking part,” he added.

Lastly, Balich is creating a daily water show off Doha’s corniche, the promenade alongside the city’s bay.

Featuring fountains, drones and fire, Balich said the corniche display will be three times as big as the fountain show at the Bellagio in Las Vegas.