Asian nations ready to ease back into international football 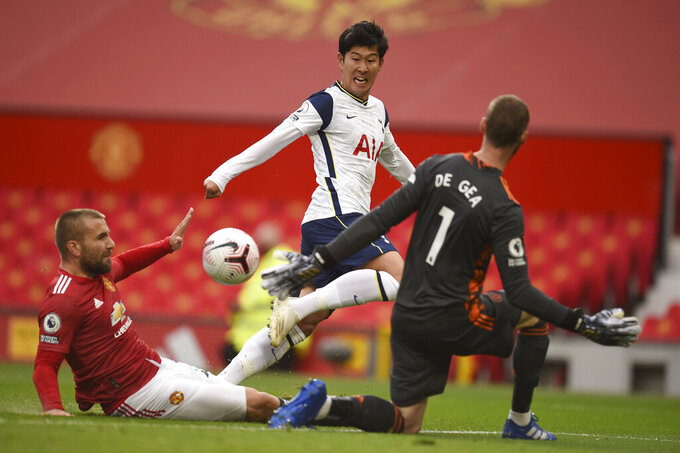 SEOUL, South Korea (AP) — Tottenham star Son Heung-min isn't required for the South Korean national team's return from a COVID-19 enforced hiatus, so he can focus on the Premier League.

It'll be full domestic-based squads when South Korea and the South Korean under-23 teams meet Friday in the first of two games in Goyang, north of Seoul, in their return to action following the lockdown.

Japan is approaching its return in contrasting fashion, using only foreign-based players in its squad for international friendlies in the Netherlands against Cameroon and Ivory Coast. Because of travel restrictions and quarantine regulations, it would have taken players out of the J-League for too long if they'd been forced to assemble in Europe.

Had coronavirus not shuttered the world of sport in March, Asia would now be in the final stages of qualification for the 2022 World Cup. Instead, qualifying has been pushed back to 2021 and continental heavyweights are having to think outside the box to prepare for a full return to international competition.

With all arrivals in South Korea subject to 14 days quarantine, it was decided that Son, who has scored six goals for Tottenham in the first four games of the Premier League season, could stay in London for this international break. Lee Kang-in of Valencia and German-based star Hwang Hee-chan were also given leaves of absence.

Coach Paulo Bento can only use only home-based players, but he's grateful for the chance to get a squad together for the first time in 11 months.

“I’ll use these exhibition matches as an opportunity to review some of the things we did in the past, and to help new faces get acclimated to our system," Bento said.

The Under-23 squad had been all set to compete in the Olympics in July, but the Tokyo Games were postponed for 12 months because of the pandemic.

“I think the players are also really excited to be here,” Kim Hak-bom, head coach of South Korea’s Under-23 squad, said. “Our fans have been thirsting for national team action, and we’ll give them something to cheer about. My role as the under-23s coach is to keep developing young players and have them graduate to the senior team.”

Japan has selected only European-based players for friendly games in Utrecht, Netherlands.

“We haven’t been active for almost a year, so I want to reaffirm the fundamentals and unify our intentions,” Japan manager Hajime Moriyasu said.

It is the first time that Japan has selected a roster made up completely of overseas-based players. It means that as well as Takumi Minamino of Liverpool and Sampdoria’s Maya Yoshida, Moriyasu has called young talents such as Takefusa Kubo of Villareal in Spain and Yukinari Sugawara of AZ Alkmaar in the Netherlands.

“I’m incorporating some young and inexperienced players to help improve their level,” Moriyasu said. “I want us to beat Cameroon and the Ivory Coast and get on track toward the Tokyo Olympics.”

China is holding a five-day training camp in Shanghai, while Iran takes on Mali and Uzbekistan. Asian champion Qatar meets Ghana in other international friendlies.