Beijing Olympics open with nod to Year of the Tiger 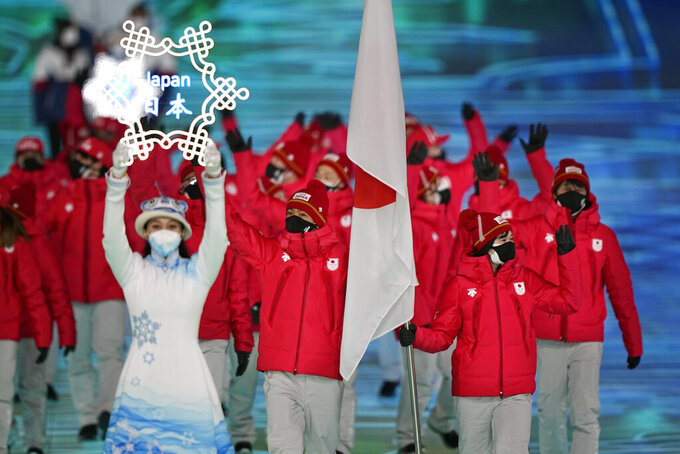 Arisa Go and Akito Watabe, of Japan, lead their team in during the opening ceremony of the 2022 Winter Olympics, Friday, Feb. 4, 2022, in Beijing. (AP Photo/David J. Phillip)

BEIJING (AP) — Days after quietly ringing in the Chinese New Year, Beijing is celebrating the Year of the Tiger on the Olympic stage.

The tiger — a symbol of strength and good luck in Chinese folklore — was featured during Friday’s Winter Olympic opening ceremony. The placard bearers for all 91 countries in the Parade of Nations each wore a unique tiger-head hat, and a children’s choir was outfitted in traditional tiger-head shoes made in the northern Hebei province.

Celebrations for the Lunar New Year were muted across Asia on Monday amid concerns over the coronavirus, but hopes are high that the Year of the Tiger might return some sense of normalcy.

In Chinese mythology, the tiger is considered the king of all animals, and tiger-head hats and shoes are commonly worn by children to ward off demons and bring good luck. The hats created for the placard bearers Friday were designed in blue and white to represent snow and ice, while the shoes worn by the choir were a bright combo of orange, yellow and green.