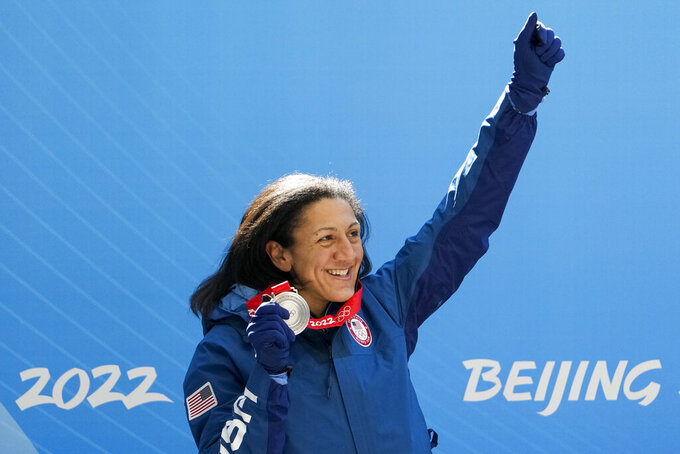 Elana Meyers Taylor, of the United States, celebrates winning the silver medal in the women's monobob at the 2022 Winter Olympics, Monday, Feb. 14, 2022, in the Yanqing district of Beijing. (AP Photo/Pavel Golovkin) 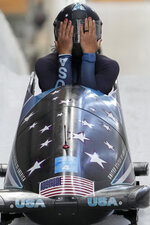 BEIJING (AP) — She has raced on at least 15 different bobsled tracks in 11 countries. She’s had no fewer than 41 different teammates in her sleds. She possesses more Olympic medals than any bobsledder in U.S. history, with a chance at one more this weekend. She has become an advocate, fighting for equality for women in sports. And she became a wife and mother along the way.

After 15 years as a bobsledder, Elana Meyers Taylor has done just about everything she wanted.

And now, the finish line might be in sight.

Without making any sort of official “this is it” declaration, Meyers Taylor is thinking about retirement and hinted that the women’s race at the Beijing Olympics — it starts Friday and ends Saturday — may represent her final official time in a sled.

“There’s a good chance that it’s my last one,” Meyers Taylor said.

On the surface, that’s not entirely surprising. At 37, her silver medal in the inaugural women’s monobob event earlier this week made her the oldest woman to medal in any Olympic bobsled event; she’s about three months older than Italy’s Gerda Weissensteiner was when she captured a bronze at the 2006 Turin Games.

Perhaps even more impressively, Meyers Taylor also became the oldest woman to medal for the U.S. at the Winter Olympics in any sport. She became the oldest American of either gender to medal in bobsled at the Olympics since Brian Shimer, then 39, won bronze in four-man at the 2002 Salt Lake City Games.

“All season, Elana has been on a mission,” U.S. men’s push athlete Carlo Valdes said.

It’s not like her driving skills have diminished to the point where it’s clearly time to retire. Quite the opposite, actually.

She won the overall World Cup title in the traditional two-person women’s discipline, her first points crown since the 2014-15 season. She also claimed the season-long title in the Monobob World Series — the new driver-only event — as well.

The silver medal in monobob made her 4 for 4 as far as getting to the podium in her Olympic appearances; she pushed Erin Pac to a bronze at the 2010 Vancouver Games, then drove to silver at Sochi in 2014 and Pyeongchang in 2018.

“She’s an amazing athlete,” said Sylvia Hoffman, who will push Meyers Taylor’s sled this weekend in the Olympic women’s race. “She was the first pilot that I medaled with. She’s very knowledgeable. She loves what she does. She’s very family oriented. And then sliding-wise, she is a power athlete, strength athlete, and she’s very fast. She’s just different.”

But at 37, Meyers Taylor doesn’t mind saying that the body doesn’t bounce back the way it once did. Concussions were a concern in recent years, though she seems to have cleared that hurdle. The biggest issue is family: Meyers Taylor is the mother of a son with Down syndrome and profound hearing loss, which has led to some enormous challenges on a logistical front to keep her sliding career going.

Her son, Nico, travels with her on tour; it helps that her husband, Nic, is on the men’s national team as a push athlete. A caretaker also traveled with the family during the World Cup season to help when Nico’s parents are at the track. Finding ways to make it all work has, by her own admission, been a challenge. And the Olympic experience has been especially tough, given that she tested positive for COVID-19 and had to go into isolation — meaning she wasn’t around Nico for basically the first time since he was born.

She’s quick to point out that her son has been remarkably resilient, noting that he’s handled things better than probably she even has.

“The greatest kid in the world,” she said.

Overcoming challenges hasn't been part of her story. It's been her story. Meyers Taylor — one of at least nine Black women, most of them American, to medal in bobsled in its 20-year Olympic history — wrote an essay for the U.S. Olympic and Paralympic Committee website in 2020 discussing race, racism in sports and some examples of what she and her husband have experienced.

“My job now, just like any parent, is to ensure my son has a better life than I do," she wrote in that piece.

And now, that may mean it's time for a career change.

There’s a running joke in sliding sports: Everybody retires once and comes back. And it’s not uncommon to see sliders, after an Olympic season, take a victory lap of sorts and spend one last season enjoying the last trip to the various tracks around the world.

Officially, that hasn’t been ruled out. It also should be noted that the next three world championships are scheduled to be held at what probably are Meyers Taylor’s three favorite tracks — St. Moritz in 2023, Winterberg in 2024 and Lake Placid in 2025 — so the temptation to stick around will clearly be there.

For now, all that’s certain is one last Olympic race. And then a decision will need to be made.

“All things must come to an end,” Meyers Taylor said. “I’ve had an incredible journey and if it is the end, if it is my last race, then I’m going to enjoy the heck out of it.”