Britain defeats US 54-49 for gold in wheelchair rugby 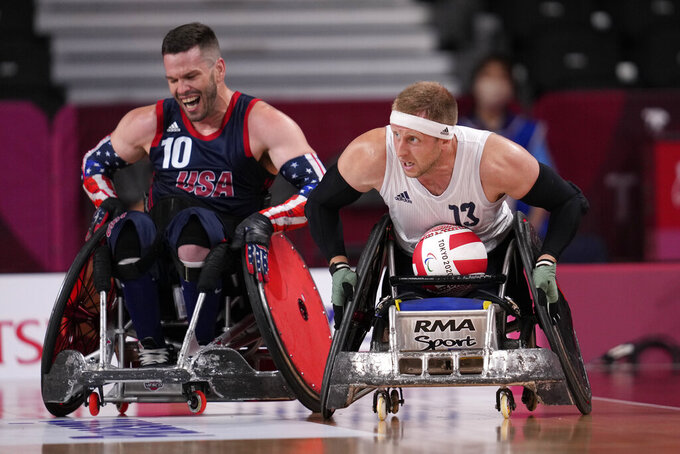 TOKYO (AP) — Britain defeated the United States 54-49 on Sunday in the gold-medal game of Paralympic wheelchair rugby, the first medal of any kind for Britain in the sport.

Wheelchair rugby has been an official Paralympic sport since 2000, and Britain’s best finish was fourth place in 2004 and 2008.

Jim Roberts led Britain with 24 tries — tries are worth one point each — and Stuart Robinson added 14. Joshua Wheeler had 21 for the United States and Chuck Aoki scored 18.

Japan, which was among the pre-tournament favorites, defeated Australia in the bronze medal match earlier on Sunday by a score of 60-52. Ryley Batt scored 27 tries for Australia and Daisuke Izezaki has 23 for Japan.

The Britain-United States game was tied repeatedly early in the final quarter until Britain pulled away for the the victory.

The United States beat Australia 49-42 in Saturday's semifinal but was foiled in its attempt to win its third gold after winning in 2000 and 2008. It lost in double overtime to Australia in the gold-medal game in 2016 in Rio de Janeiro.

Wheelchair rugby was developed more than 50 years ago in Canada, but saw its popularity rise after the famous 2005 documentary film “Murderball," which sought to remove stereotypes about athletes with disabilities.

The game is easy to watch and almost non-stop. The constant mayhem, the crashes and players being dumped upside down in their chairs, distracts from the fact that these athletes have spinal cord injuries, they’re missing arms and legs, and they’re strapped into wheelchairs that resemble battered bumper cars.

The rules of wheelchair rugby are basic, and there are not many stoppages in play on the basketball-size court.