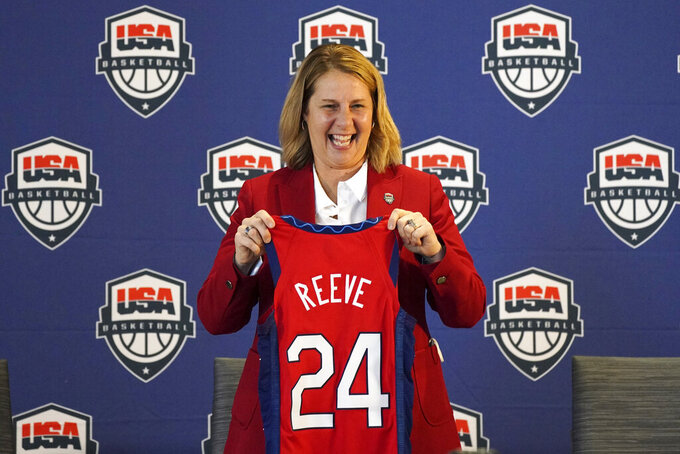 Minnesota Lynx head coach Cheryl Reeve poses with her ceremonial jersey during a press conference to announce she'd been named the head coach of women's USA Basketball, Wednesday, Dec. 8, 2021, at the Target Center in Minneapolis. (Anthony Souffle/Star Tribune via AP)

USA Basketball didn't have to look far for its next women's coach, turning to Cheryl Reeve.

The Minnesota Lynx coach and general manager has been an assistant on the last two Olympic teams. Now she's taking over the U.S. women's national team.

“What I’ve learned with working with Cheryl and getting to know her over several years is that when you get Cheryl involved, you get all of her,” USA Basketball CEO Jim Tooley said. “She’s engaged. She’s committed, and her passion and enthusiasm are contagious.”

She will be the first professional women’s basketball coach to lead the team since Anne Donovan was courtside for the 2008 Beijing Olympics. UConn’s Geno Auriemma was the coach for the 2012 and 2016 Games. South Carolina’s Dawn Staley led the Americans to a seventh consecutive gold medal at the Tokyo Olympics this past summer.

“I am incredibly humbled and excited to be named head coach of the USA Basketball Women’s National Team, one of the greatest dynasties in sports,” Reeve said. “I have enjoyed an incredible journey with USA Basketball since joining in 2014 and look forward to what lies ahead as we seek more gold for the USA. I am indebted to the USA Basketball Board of Directors, Dawn Staley, Geno Auriemma, and of course, my Lynx family who have positioned me for this prestigious opportunity.”

“I think what we’ve done for many years has been really successful. It will serve me well to listen to what has worked," Reeve said. “From a coaching stand point, what I witnessed is that coaches have to come in and be themselves. I’ve had good fortune to be around that and see what does and doesn’t work.”

The U.S. is in a bit of transition with five-time Olympic gold medalist Sue Bird retiring from international play. Her backcourt partner for all those gold medals, Diana Taurasi, hasn’t decided whether she will keep playing for USA Basketball or retire as well.

Four-time Olympic gold medalist Sylvia Fowles, who plays for Reeve in Minnesota, also said she is retiring from USA Basketball. The Americans still will have a dominant interior presence with Brittney Griner, A’ja Wilson and Breanna Stewart.

Reeve knows there's a wealth of talent in the U.S. team pool.

“I think with the start of a new quad it means a fresh look at the pool for the committee," Reeve said. "I'll have a list of people from my experiences with USAB and the WNBA. Each time you do this, the pool starts over. That will be interesting. There are a lot of good players in the WNBA regardless of position.”

Reeve’s first major international event will be the World Cup next fall in Australia. The Americans earned an automatic berth by winning the Olympics.

The U.S. will host a four-team qualifying tournament for the World Cup in February that includes Russia, Belgium and Puerto Rico.