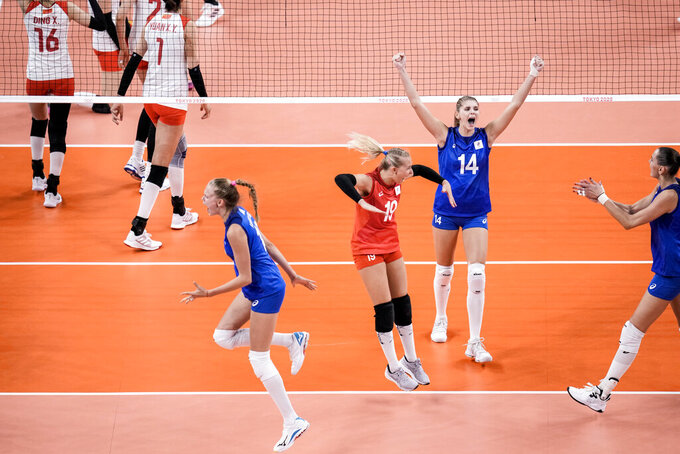 TOKYO (AP) — After winning gold in Rio de Janeiro and coming to the Olympics five years later as one of the favorites, China's women's volleyball team is just trying to win a match in Tokyo.

The Chinese dropped their third straight match in pool play at the Olympics with a five-set loss to the Russian team on Thursday that dealt another big blow to China's medal chances.

Coach Lang Ping's team overcame three losses in five pool-play matches in Rio, but she knows the situation now is much more dire with China in fifth place in Pool B with only one point through three matches.

“Yes it is,” Lang said through an interpreter when asked if this was a more difficult situation than 2016. “But we'll go try.”

The biggest difference from 2016 to 2021 is the health of star Zhu Ting, who was the MVP of the tournament in Rio and again at the World Cup in 2019.

Zhu came into these Olympics with a lingering right wrist injury that has sapped her of much of her usual power as a blocker and spiker. The player U.S. coach Karch Kiraly called the “bedrock” of the Chinese team, has looked nothing like that in Tokyo.

She played only sparingly in an opening loss to Turkey, getting uncharacteristically subbed out in both the second and third sets.

Zhu has remained on the court the past two matches, but hasn't been nearly as effective as usual and Lang said she would have to consult with the doctors to determine whether Zhu will be able to play in the final two pool matches.

“Her injury just couldn’t heal,” Lang said. “I don’t know if she can continue to play.”

Despite Zhu's injury, the Chinese appeared to be back on track thanks to strong play from 21-year-old sub Li Yingying. After China dropped its seventh straight set to open the Olympics, a sense of relief came when the team pulled out the second set.

The Chinese players danced in celebration and followed that up by winning the third set and then having two match points in the fourth. But the Russians managed to save those and won it 15-12 in the fifth, setting off their own celebration as the Chinese could only watch.

Lang then told her players to walk out with their heads high despite losing once again.

“There are losses and wins in sports,” Lang said. “You can’t get that down if you just lose a match.”

Lang won Olympic gold as a player in 1984 and then became the first person to win gold as both player and coach in men’s or women’s indoor volleyball in Rio.

The coach known as the “Iron Hammer” tried to break up the monotony of training leading up to the delayed Games by having her players take part in fun soccer games and races.

But none of that has mattered without Zhu playing at her best.

“I think it will be better (if) Zhu Ting could spike better,” Lang said. “We couldn’t blocked well. I think the fifth set would be much better if Zhu Ting could perform better. But her injury did affect her performance. She was hesitant when she tried to block.”

China wasn't the only team dealing with an injury. Brazil setter Macris Carneiro injured her right leg in a win over Japan. Her teammates came to hug her on the sideline after the victory and she was taken off in a wheelchair.

China still has matches left against undefeated Italy and winless Argentina and will likely need to win both to have a chance to advance as one of the top four teams in Pool B.

The United States beat Turkey 3-2 to improve to 3-0 along with Italy in Pool B. Both teams have clinched spots in the quarterfinals.

The Americans lost their first two sets of the tournament after winning eight straight, but are in strong form in their bid for their first Olympic gold medal in the sport.

Turkey forced a fifth set after falling behind 2-0, but the Americans held on 15-12 for the win.

“It's the first time we've gone five sets all year," U.S. coach Karch Kiraly said. “I think that was good for us to be pushed. Obviously, would we rather win a little faster? Yeah. But I think this is much better ultimately to prepare us. The tournament will only get tougher from this point forward.”

Italy beat Argentina in straight sets earlier in the day and is assured a spot in the quarterfinals.

South Korea outlasted the Dominican Republic in five sets and Serbia swept Kenya in the first two matches of the day in Pool A. Serbia and Brazil are both 3-0 through three rounds of pool play and have clinched spots in the quarterfinals.