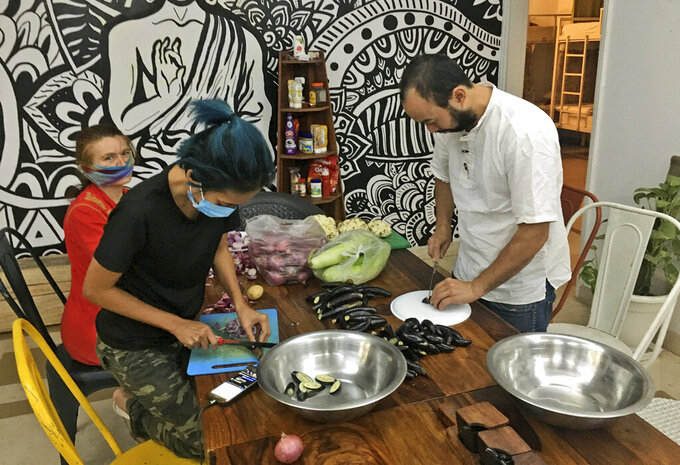 Stranded foreign tourists cut vegetables to make a meal at a hostel in New Delhi, India, Thursday, April 2, 2020. Dozens of tourists from Britain, Canada and Australia are finding themselves stranded in the Indian capital with their vacations abruptly ended by India’s three-week lockdown and stopping of international flights amid new coronavirus. (AP Photo/Shonal Ganguly) 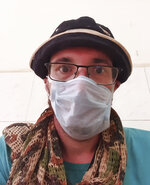 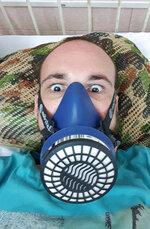 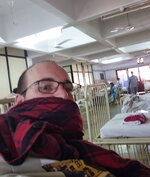 NEW DELHI (AP) — Tourists stranded in India after their vacations were abruptly ended by India’s coronavirus lockdown and grounded flights are running out of money and hoping their embassies can help them get home.

British tourist Emma Snashford said she and her friend had been kicked out of their hotel and when she sought help from officials in London, she was told to keep waiting.

They were visiting Jodhpur, a town popular for its royal palaces, forts and temples, but were kicked out of their hotel shortly before India announced the lockdown on March 24. They managed to find a hostel in New Delhi that opened its doors to 25 foreign tourists.

“We’ve been desperate for quite a while,” said Lambert Desrosiers Gaudette, a Canadian, who is now trying to get on a French rescue flight.

“We have called the (British) embassy and we get put through to London and no one really knows what’s going on. For the last week, we’ve just been told to sit tight, wait,’’ Snashford said.

Australian Matthew Chinery had planned for a long vacation, including the tourist’s paradise of Himalayan Kashmir and learning new sewing techniques he could use for his business back home. But his dream holiday turned nightmarish after the lockdown started.

While in the western city of Goa, popular for its beaches, Chinery was kicked out of a hostel because his smoker's cough resembled a COVID-19 symptom. Other hotels and hostels refused to let him stay unless he had a coronavirus-negative certificate.

So he checked himself into a government hospital, got tested and waited four days in isolation with other suspected cases of the highly infectious disease, he told The Associated Press on Thursday.

The medical certificate still didn't make finding a room easy. He managed to get one with help from a friend, but the hotel's staff is so scared, they don't knock at his door to leave his packaged meals.

“They don’t let me know it’s out there, so all the crows get to the food first, and it’s cold, and I can’t eat it,” he said.

Chinery is running short on money, internet, supplies and patience.

“Get us the hell out of here,” he said. “We’re Australian citizens. We are stuck here. We’re not here voluntarily. We want to get home.”

Another Australian, disc jockey Stewart Dufty, arrived in India early last month and is now concerned about his family back home.

"I'm worried about how all of this is affecting them, I mean my mother is in her late 70s. And I do know that once I get back, I've got up to two weeks’ quarantine. I'm happy to do that. I don’t want to be a risk for anyone else there," Dufty said.

He said he was very short of money because he was unable to go to banks or a Western Union to get cash.

The Australian High Commission said it was exploring options for a commercial charter flight for Australians to return. “There is no guarantee and it will be difficult to achieve,” the statement cautioned.

India has halted all international flights until April 14, when the three-week lockdown is scheduled to end. India’s Health Ministry says the country has more than 1,800 confirmed cases and 53 deaths.