Earplugs may help USA Luge's Summer Britcher at the Olympics 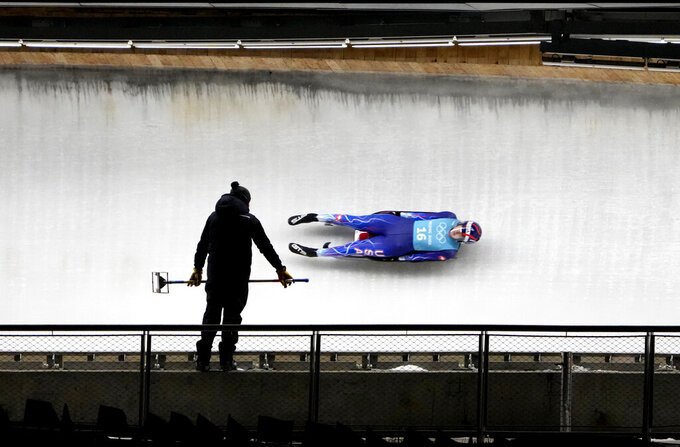 Summer Britcher of the United States takes a practice run during the women's singles luge training at the 2022 Winter Olympics, Thursday, Feb. 3, 2022, in the Yanqing district of Beijing. (AP Photo/Dmitri Lovetsky)

That has nothing to do with noise.

The start to a luge race is critical: Sliders, wearing gloves with tiny spikes on the bottom of their fingertips, dig into the ice as they paddle at the start and look to build every bit of momentum possible to start propelling them down the track.

But Britcher has a broken middle finger on her left hand, so she’s going with a new plan at the start. She’ll dig her knuckles into the ice as she paddles, using earplugs — the soft, pliable, silicon kind — inside her gloves to serve as padding.

Hey, it’s the Olympics. Whatever it takes.

The women’s event starts Monday with the first two runs of the four-run competition; medals get handed out Tuesday. Britcher is one of 11 women who won at least one medal in World Cup singles competition this season, and having that many athletes know their way to the podium suggests the women’s event at the Beijing Games could be as wide-open as any in Olympic history.

“I want to slide at least to the level that I’m capable of,” Britcher said. “And I think that if I can pull that together ... all of these training runs have felt really good, I’ve got great energy right now just being at the Olympics, and if I can slide to that level and slide to what I know I’m capable of, then no matter what my result I’ll be happy.”

The level she’s capable of is, well, elite.

She’s a five-time winner on the World Cup circuit. She’s come home from the World Cup with at least one medal in each of the last seven seasons. And these are her third Olympics, an achievement only five American women’s luge athletes have previously reached.

But Britcher also knows her last two seasons haven’t been her best. Part of that can be attributed to how USA Luge skipped half of last season while finding ways to deal with the pandemic, but Britcher knows that even in difficult times she can be better.

“I’ve had a tough two years, like everyone,” Britcher said. “I don’t think I’ve been sliding to the best of my abilities. I saw a really cool promo video that somebody did with some interviews and stuff and some clips of previous footage and the commentators were talking. It was during Pyeongchang and they were saying all this like, ‘Oh, look at her slide. She’s not slider she was four years ago.’ And I was watching myself slide and I was like, ‘You know what? I haven’t been sliding like that.’”

Britcher was only 11th in the World Cup standings this season, though she probably cost herself as many as five spots by the way she had to finish the schedule. A January crash in Sigulda, Latvia, is where she broke the finger, and her results were basically nonexistent after that. The irony is that Britcher broke her finger because she tried adhering to the cardinal rule of luge crashes — that being not to let go of the sled, for fear that it may break.

The force the sled generated when it hit the wall wound up snapping her finger, her first broken bone in 16 years of luge.

“And then I also broke my sled in three places,” Britcher said.

The sled is fine. The finger isn’t. But Britcher came up with the earplugs idea — she bought them for plane rides — after trying to paddle with her knuckles and bruising them in the process. Some USA Luge athletes paddled with their knuckles in the 1980’s and 1990’s, but most everyone in the world has used their fingertips since.

The good news for Britcher is that the Yanqing Sliding Center track has a very steep start. Some tracks might see sliders taking five or six paddles; Britcher figures she can get going here with just three.

“I’m willing to push through any amount of pain, but I’m not willing to put myself in a situation where I’m going to further damage this or create all kinds of bigger problems,” Britcher said. “Four years ago, I would have said, ‘I don’t care if I need 10 surgeries, I’m going to paddle as hard as I can,’ but I’ve definitely kind of realized that I’ll have this body forever. And even though it’s just a finger, you’d be surprised by how much I can’t do by taking away one little finger.”