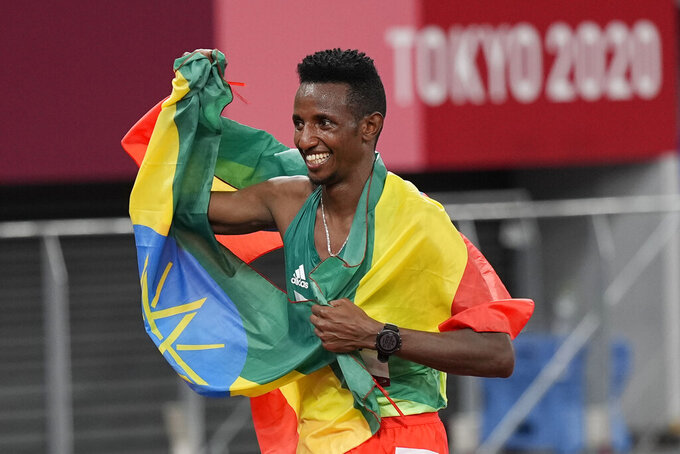 TOKYO (AP) — Selemon Barega won the first track and field gold medal of the Tokyo Olympics on Friday and claimed the 10,000-meter title back for Ethiopia after nearly a decade of dominance by Mo Farah.

Barega broke clear on the last lap and won in 27 minutes, 43.22 seconds, upsetting world champion and world-record holder Joshua Cheptegei of Uganda, who took the silver medal in 27:43.63. Jacob Kiplimo of Uganda was third for bronze.

Barega’s last-lap burst was good enough as he moved out in front with about 300 meters to go and held off the late charge by the two Ugandans, who were expected to go 1-2 in the first track final of the Tokyo Games.

For one moment it looked like Cheptegei might run Barega down on the home straight, but the Ethiopian dipped his head and dug in as Cheptegei’s challenge faded.

The 21-year-old Barega etched his name alongside Ethiopian greats Kenenisa Bekele and Haile Gebrselassie, who are maybe the country's two greatest distance runners and who both won the 10,000 title at the Olympics — twice each.

“Even in the future, I want to make history like my previous colleagues,” Barega said through a translator. “I’m also very hopeful to achieve more in this Olympics.”

Cheptegei broke the world record in his last major 10,000-meter race in October and was seen as the best in the world coming into the Olympics. But he took a gamble by not running in any international races over the distance since that record-breaking run.

Kiplimo had the fastest time in the world this year and was expected to follow Cheptegei home.

Barega left them both behind.

“I had a little pressure because I’d never won an Olympic medal," Cheptegei said. "I’ve been having some challenges mentally, some challenges injury-wise. At one point I thought maybe I needed to refresh my mind and stay with family and wait until the next season. But if I had, I would not have the Olympic (silver) medal.”

Barega had no major titles in the 10,000 before Friday, although he does have a world championship silver medal in the 5,000. His first 10,000 gold was the big one.

It was also a change of fortune for Barega, who said he had become deeply discouraged in recent months after spending a lot of the buildup to the Olympics training on his own because of the coronavirus pandemic.

The last Ethiopian to win the 10,000 at the Olympics was Bekele, who won back-to-back titles in 2004 and 2008. Gebrselassie won in 1996 and 2000, giving Ethiopia four straight titles before Farah intruded.

Farah won gold at the last two Olympics but isn’t running in Tokyo after failing to make the British team.

The Olympic 10,000 has held a special place for the East African nation since Miruts Yifter first won it for Ethiopia in 1980.

On Friday, Barega won at a largely empty Olympic Stadium, but other Ethiopian athletes and team officials clapped and screamed loudly from the seats by the finish line as he came home first. He grabbed an Ethiopian flag and held it with both hands over his head as he trotted down the track.

The men’s 10,000 was the only medal event on the first day of track competition.