EXPLAINER: Why track cycling records are falling at Olympics 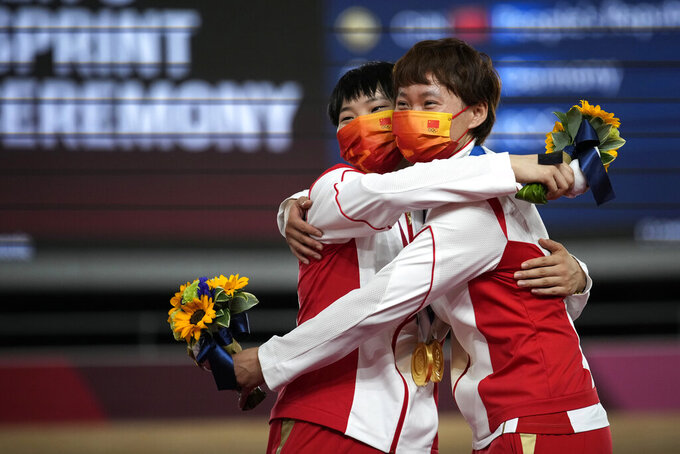 IZU, Japan (AP) — Everybody expected records to fall when the track cycling program began at the Tokyo Olympics, but nobody expected the German women's pursuit squad to shatter the mark held by the two-time and defending gold medalists from Britain. Or the Chinese to lower their team sprint record. Or Denmark taking down the Olympic record in men's team pursuit.

All on the first day of competition.

“We knew there would be world records broken this week. That's the first thing,” explained Gary Sutton, the endurance coach for the world champion U.S. women's pursuit team. “The track is quick.”

Indeed, just as the track surface at Olympic Stadium in Tokyo is shaping up to be a fast surface, so is the Siberian pine wood of the Izu Velodrome. But this not some new track built specially for the Olympics. It's a decade-old velodrome in the wayward forested hills near Mt. Fuji. Nor is it located at high altitude, like the historically fast velodrome in Aguascalientes, Mexico, where the thin air has produced a multitude of world records over the years.

So why are records falling in Japan in seemingly every race? Well, it's a combination of factors — a perfect storm, if you will — that has allowed riders regardless of discipline to set their sights on some quick times.

Simply put, training methods continue to evolve and improve with each Olympic cycle, making athletes themselves even better. Yes, that includes more effective and productive workout plans, but it also means finely tuned recovery periods and the right nutrition to fuel the efforts, all of it customized for each athlete's specific body composition.

And all of it constantly monitored by an array of technology. Like in many other sports, they are aware of specific output of watts in training, the quality of their sleep and a complete breakdown of the food they consume.

The velodrome sits about 1,000 feet above sea level, so riders aren't getting any benefits from thin air. But they are getting a boost from the warm weather and the air density. It may seem counterintuitive, but those who study physics and chemistry know that humid air — like the air found in a Japanese summer — is less dense than dry air.

“The track is good,” Italy's Elia Viviani said. “The temperature is really good. But mainly, the density of the air will make a really big difference, so I think in the team pursuit we're going to see some really fast times.”

The American women have drivetrains on the left side rather than the right, which studies by bike manufacturer Felt have shown improves aerodynamics since riders only turn left. The bikes the British are riding, with input from sports car maker Lotus, have radically different geometry that is supposed to improve air flow.

Many teams are riding bikes that use proprietary carbon fiber that is lighter and stiffer than previous Olympics. Others have experimented with 3-D printed components, revolutionary lubricants and extensive wind-tunnel testing.

“The basic rules of aerodynamics haven’t changed – you can’t alter the laws of physics – but what we have learned over almost 30 years is to take a more holistic approach to every project,” said Rich Hill, the chief aerodynamicist for Lotus. “As far as track cycling goes, it’s man and machine in perfect harmony.”

It comes at a cost, too. National teams and their equipment partners pour millions into research and development, and bike companies can only hope Olympic success translates into increased retail sales. The rules state any bike used in competition must be made available to the public, but the price tags could require a second mortgage on your house.

“This is the best time of an Olympic cycle because all the shiny bits come out,” British sprinter Jason Kenny said. “We have our best bike, our best wheel, our best tire, our best kits on. This is it. A really fun time to be involved.”