Jacobs to carry Italy's flag at closing ceremony of Olympics 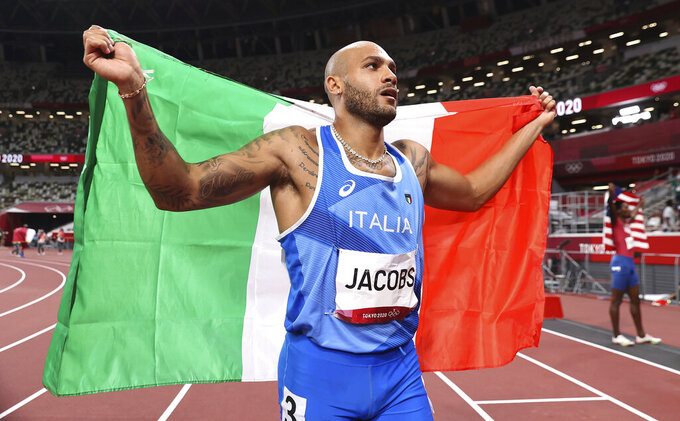 Lamont Marcell Jacobs of Italy celebrates after winning the final of the men's 100-meters at the 2020 Summer Olympics, Sunday, Aug. 1, 2021, in Tokyo, Japan. (Cameron Spencer/Pool Photo via AP)

TOKYO (AP) — The Texas-born sprinter who was the surprise winner of the biggest race of the Olympics will carry Italy’s flag at Sunday’s closing ceremony of the Tokyo Games.

Italian Olympic Committee president Giovanni Malagò announced the honor for Marcell Jacobs on Thursday, shortly after Jacobs helped his country qualify for the final in the 4x100-meter relay.

Having not cracked 10 seconds until this year, Jacobs’ victory immediately raised doubts about his performance on social media.

“I know that I got to this point by making a lot of sacrifices, by getting through a lot of losses and disappointments,” Jacobs said. “I always bounced back and pulled my sleeves up and I know that this gold is the product of hard work."