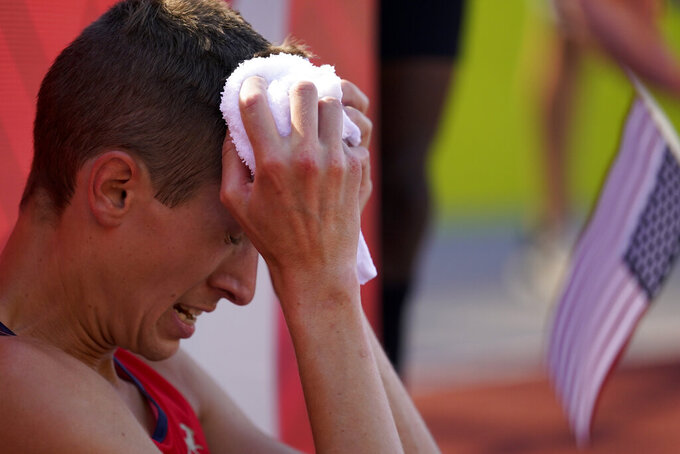 Mason Ferlic cools off with a cold towel after the finals of the men's 3000-meter steeplechase at the U.S. Olympic Track and Field Trials Friday, June 25, 2021, in Eugene, Ore. (AP Photo/Ashley Landis)

EUGENE, Ore. (AP) — Hurdler Sydney McLaughlin's knee was bloody. Lined up three lanes outside of her, Nnenya Hailey was so hot, she looked to the stands and begged for water.

That was before the race started.

Thanks in part to some hair-trigger sensors on the starting blocks, hurdlers felt the heat as acutely as anyone Friday on a 92-degree day at U.S. Olympic track and field trials.

It took five tries to get a heat of the men's 110 meters off and running. It took another four to get McLaughlin and Co., off the blocks for their 400 qualifier.

“I've never had that many restarts ever in my life,” said McLaughlin, whose upcoming showdown with world-record holder Dalilah Muhammad could be one of the best races of the Olympic season. "My knee started bleeding a little bit just from the hot track, getting down that many times.”

McLaughlin won her heat. Hailey finished second. But with the temperatures heading to triple digits this weekend, this hardly felt like a no-fuss day of preliminaries for runners with bigger races in store.

“After the second restart, you know when you spit and your spit is, like, white?" Hailey said. “I couldn’t run like that. I literally looked in the audience and was like, ‘Who has a bottle of water?’"

She took a swig and passed it down the line.

“Already crusty before I got here. By the time I leave, it’s probably going to be obliterated,” she said.

Only 20 minutes earlier, the men endured a similar struggle.

Four times they lined up. Four times the starting gun went off. Each time, the alarm sounded and the gun went off again to signal the illegal start. The crowd hooted and whistled. Ato Bolden and the NBC commentators went nuts, wondering aloud why the sensors weren't being disabled. Only one runner, Samuel Brixey, was disqualified, but he lodged a protest and was moved on to the next round.

“Cut me some slack, man,” Brixey said before he knew the result of the appeal. “I was three for three and they call us back and they notify a couple other guys like, ‘Hey, your feet are moving.’ And then there was me, and they’re just like, ‘red card.’”

The rest of the day was about qualifying. And gearing up for what's expected to be a sizzler of a weekend. Among those moving through without much trouble were Allyson Felix and Noah Lyles, both in the 200.

Felix could win an Olympic spot with a top-three finish Saturday, though she'd have to choose between that distance and the 400, which overlaps on the Olympic schedule.

Lyles moved to the semifinals along with his younger brother, Josephus, who trains with him in Florida.

“That humidity there, it’s like a whole weight on top of you. This, it’s like running through paper,” Lyles said.

That would be hotter than any day at world championships two years ago in the sultry Middle East city of Doha, Qatar. With expense not an issue, organizers installed air conditioning in the outdoor stadium to make things more tolerable there.

No such luck in Eugene. But USA Track and Field has moved Saturday’s 20K race walks up two hours, to 7 a.m., and switched the weekend’s distance races, the women’s 10,000 and men’s 5,000, to morning from the heat of the day. The other 12 finals this weekend, along with the grueling heptathlon, remain as scheduled — all in the afternoon, all in the heat of the day.

“You don’t beat the heat. That’s not something you run from,” said long jumper Jarrion Lawson. “Usually with heat comes great performances, so prepare and hydrate and compete and try to get off the track as soon as possible.”

Easier said than done for some.

“I don’t even know. I lost count,” said hurdler Jaylan McConico, who won the heat that needed five tries to get off the blocks. “After two, it was like, ‘All right, this is getting kind of old now.’”