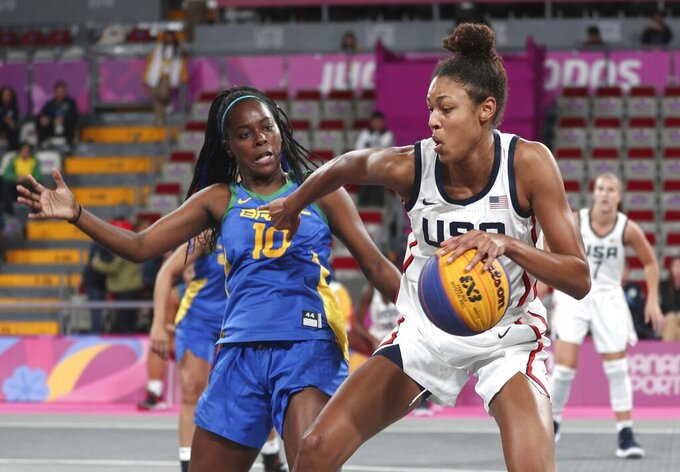 FILE - In this July 29, 2019, file photo, Olivia Nelson, right, of the United States, drives around Evelyn Mariano, of Brazil, during the women's basketball 3x3 semifinal match at the Pan American Games in Lima, Peru. The Olympics website calls 3x3 basketball “exciting, urban and innovative.” It was added to the program for Tokyo to lure a younger audience and get more countries involved in one of the core sports of the Olympic Games. (AP Photo/Martin Mejia, File)

The latest stop on the perennial search for the younger, attention-span-challenged audience for the Olympics might look familiar — the blacktop, and 3-on-3 basketball.

Not a pickup game, mind you. Once the Olympics gets hold of this version of street hoops, it will only share a faint resemblance to anything happening on an urban playground.

For one, there will be no Americans — at least none playing in the men's tournament. Another difference is that these games will have refs, a scoreboard and each team gets one sub.

But some of it might look familiar. Games are first to 21 (Or whoever is winning after 10 minutes.) Teams have to clear the ball back to around the 3-point line after rebounds. Inside buckets are worth one, and “3s” are worth two. The teams have coaches but they are for behind-the-scenes stuff, not allowed on the court.

“For me, the best thing is, it's always been fun to play,” said Dusan Bulut, widely considered the best in the world, who will lead Serbia into the tournament as a favorite. “When you play 3-'x'-3, you have all the freedom in the world and it was so much fun for me because I can show everything I am."

In addition to trying to capture more young eyes, one of the IOC's stated missions in bringing 3-on-3 basketball to the big stage was to expose more of the world to the sport. In at least one respect, this mission has been accomplished. Mongolia will bring one of the eight teams in the women's field.

Mongolia is not a newcomer to the Olympics, but it has always fielded competitors in individual sports, such as wrestling and boxing. This will be the first time the country has entered a team sport into the Summer Games.

It seemed a foregone conclusion that the U.S. would field a team in the sport it invented. Not to be on the men's side.

Unlike the 5-on-5 version, a win at the World Cup for the U.S. in 2019 did not secure an Olympic spot. And the Americans, led by former Purdue star Robbie Hummel, suffered a stunning upset to the Netherlands in May that knocked them out of the race for one of the last Olympics spots. It means the world's second-ranked team, behind Serbia, will be watching the Olympic debut of 3x3 from home.

“I wanted to have a backup,” she said.

Turns out, 3x3 fits her game quite nicely. She's the top-ranked female player in the world.

She calls the ranking “a reward for my determination,” and says Tokyo could just be an appetizer. The next Olympics are in Paris, and Guapo says she hasn't ruled out a shot at the marathon, maybe at the Los Angeles Games in 2028.

Part of the fun of 3x3 is the constant soundtrack that plays while the games go on.

One player, Italy's Rae Lin D’Alie, who goes by “Rae Rae,” is part of the soundtrack.

She recorded a song, “3x3 Anthem,” that the sport's international federation, FIBA, named its official song in 2020.

The Wisconsin native played for the Badgers and left the school in 2010 as leader in career games played. She has dual citizenship in Italy and, last month, helped her team secure the final Olympic berth.

Teams will play round robin, sometimes two games a day, from July 24-27. The semifinals and finals all take place July 28. All the action is at Aomi Urban Sports Park, an outdoor venue with a covered half court. Its also the home of the new sport of climbing.