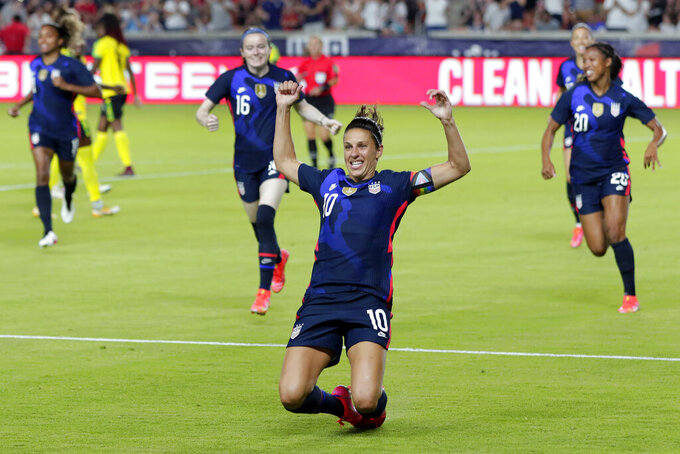 HOUSTON (AP) — Carli Lloyd scored 24 seconds into the game and the U.S. women's national team went on to defeat Jamaica 4-0 on Sunday night in the Summer Series.

The U.S. women are undefeated in 41 straight matches, the third-longest streak in team history. The team is undefeated in 55 games on American soil.

Lloyd’s goal was the fastest for the Americans since Alex Morgan scored in 12 seconds against Costa Rica in a 2016 match.

Lloyd also became the oldest woman — at 38 years, 332 days — to score a goal for the national team. It was Lloyd's 303rd appearance with the team.

“Records are records, they're always going to be broken,” Lloyd said. “For me, it's just about winning games, it's helping the team. I don't go searching for these records, it's just a good reminder just to know how grateful I am to step out on the field. Nothing has ever been given to me. I've had to earn every single opportunity.”

Head coach Vlatko Andonovski made six lineup changes from the 1-0 victory in the Summer Series opener Thursday against Portugal.

Andonovski started Adrianna Franch in goal, giving Alyssa Naeher the night off. Midfielder Catarina Macario, who played at Stanford before signing professionally with Lyon, made her fourth national team appearance.

Andonovski is using the Summer Series matches to decide the final squad for the upcoming Olympics. He will have to cut the roster to just 18 players for Tokyo.

“It is always difficult," he said. “We have a very deep roster, the depth chart is very deep in quality. So regardless of what the number is, it will always be difficult.”

Lindsey Horan scored on a penalty kick in the seventh minute. Midge Purce made it 3-0 in the 22nd minute, for her second international goal.

Morgan added a final goal in stoppage time. It was Morgan's 110th goal for the United States.

Rose Lavelle rolled her ankle in the opening half and eventually left the game as a precaution.

The United States, 8-0-1 this year, will head to Austin to play Nigeria at the new Q2 Stadium on Wednesday night. The Super Falcons played to a 3-3 tie with Portugal in the earlier game at BBVA Stadium on Sunday.