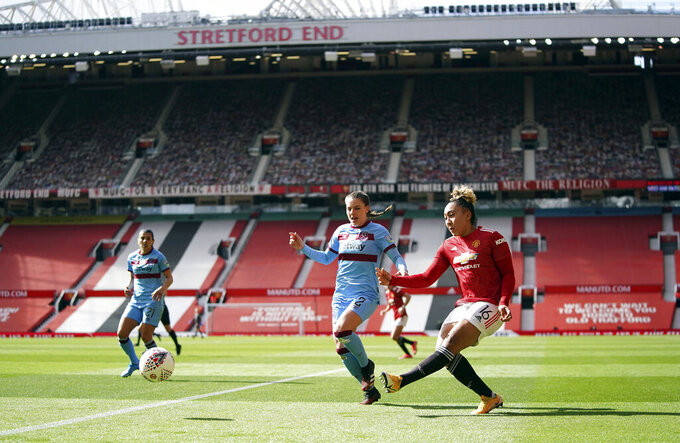 MANCHESTER, England (AP) — Manchester United women's team made its Old Trafford debut on Saturday with a 2-0 victory over West Ham.

The team normally plays its Women’s Super League home matches at Leigh Sports Village but switched to Old Trafford during the international break in the men's game.

Teenage forward Lauren James headed the ball into the net from close range four minutes after the break, and American international Christen Press doubled the lead six minutes later with a left-footed strike from 12 yards out.

“A dream come true,” forward Jessica Sigsworth said on Twitter after the match. “From playing in the streets of Doncaster in my Man United kits as a young girl to playing in the theatre of dreams where I supported some of my idols growing up... dreams really do come true, what a day.”

From a tactical standpoint, manager Casey Stoney said her team played a sloppy first half “and I let the players know during the interval."

She added: "But of course we all want to do it again and be a bit better, in front of a big crowd, next time we're here.”

The last time a women's soccer game was played at Old Trafford was during the 2012 London Olympics, according to United’s game program.

Fans are not allowed in stadiums due to coronavirus restrictions. A government plan to ease restrictions could allow limited numbers of spectators to return beginning in mid-May.

Also Saturday, the women's north London derby was played at Tottenham Hotspur Stadium for the second time. Arsenal won 3-0 and is three points behind United. In 2019, the Tottenham-Arsenal match set a WSL attendance record with 38,262 fans.