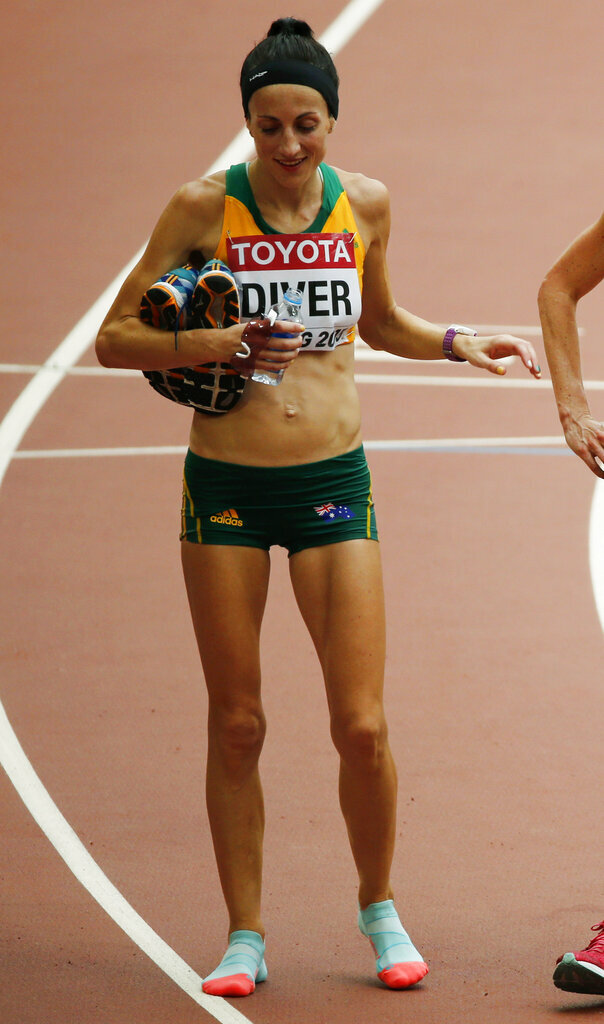 FILE - In this Aug. 30, 2015, file photo, Australia's Sinead Diver reacts after finishing the women's marathon at the World Athletics Championships at the Bird's Nest stadium in Beijing, China. Ireland-born Diver is set to become the oldest athlete to race for Australia in Olympic athletics competition after being among the six marathoners selected for the Tokyo Games.(AP Photo/Mark Schiefelbein, File)

BRISBANE, Australia (AP) — Sinead Diver was a mother of two and well into her 30s when she ran her first marathon. At 44, she's preparing for her Olympic debut.

Ireland-born Diver is set to become the oldest athlete to race for Australia in Olympic athletics competition after being among the country's six marathoners selected Friday for the Tokyo Games.

The focus on her age frustrates Diver, who ran her first marathon in October, 2014.

“I know, in some ways, it’s meant to be complimentary," Diver said in a profile for the Australian Olympic Committee. “Not a lot of athletes continue to find success in their 40s, but I’ve been running for a relatively short period of time, so it’s a very different scenario for me.”

Diver said success at any age “is all about your mindset.”

“I’m still really motivated and determined because I haven’t been doing it for that long,” she said. "My age isn’t an issue with people I train with. They’re all a lot younger than me but they show me the same respect as anyone else in the group.”

Diver will be joining 42-year-old Lisa Weightman and Ellie Pashley on the Australian team for the women’s marathon. Weightman will be contesting her fourth Olympics, becoming just the eighth Australian to achieve the feat. She's the fifth marathon runner on that list.

The Tokyo Olympics are scheduled to open on July 23. The marathons will be held in the northern city of Sapporo on August 7 and 8.

“It's a dream come true,” Weightman said. “I am extremely proud to have created this opportunity and with everything on my plate, with full-time work, (being a mother) in lockdown and an athlete, I’ve certainly built up the resilience I need to run my best in Sapporo.

“I know every athlete who lines up on the start line in Sapporo has moved mountains to get there — that start line will be a very special place."

The Tokyo Olympics have been delayed 12 months because of the COVID-19 pandemic, and there's still concern about the coronavirus with some cities in Japan experiencing a surge of infections. Restrictions in place for the Olympics because of the pandemic include a ban on international fans at the games. That means Weightman will have to leave her son in Australia while she's competing in Japan.

Living in Australia's Victoria state, which has undergone several lockdowns during the pandemic, has restricted Weightman to two races in 2020-21, including a qualifying run in Osaka and a 10-kilometer event in a personal-best time.

"I can’t complain with my form at 42 — so far I can certainly say that being in your 40s is fabulous!”

Liam Adams, Brett Robinson and Jack Rayner were selected for the Australian team for the men’s marathon.