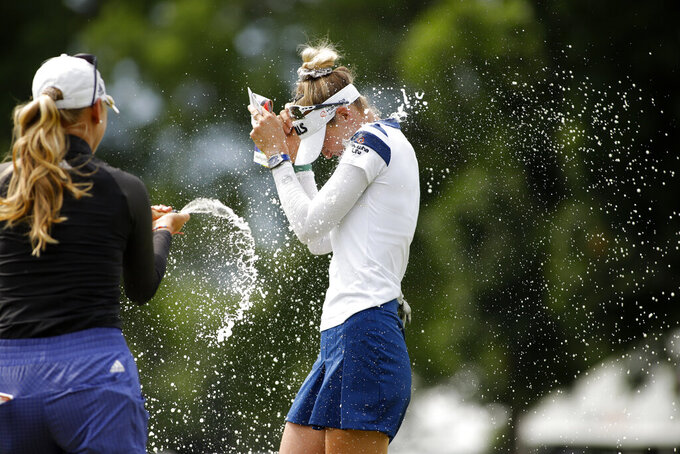 There was a time when Kristie Mewis realized her soccer career wasn't quite headed in the direction she hoped.

Mewis had fallen out of favor with the U.S. national team. She'd passed through pro clubs without finding her place.

An Olympics appearance didn't feel as if it was even a remote possibility.

Meanwhile, her younger sister Sam's star started to rise. Known affectionately as “Tower of Power,” because of her 6-foot stature, Sam became a national team regular in 2017 and was among the breakout stars of the 2019 World Cup.

Kristie, 30, excelled with the Houston Dash last year despite the coronavirus disruptions. The National Women's Soccer League team won the Challenge Cup, a tournament played in a bubble in Utah.

The elder Mewis already had the eye of U.S. coach Vlatko Andonovski, who took over the team when Jill Ellis stepped down following the 2019 World Cup win. He called her into a team camp last fall, her first call-up in six years, and she subbed into the final game of the season against the Netherlands.

Then she scored, setting a national team record with 2,722 days between goals.

“She played extremely well in the league in the last year and a half or so, and earned herself an opportunity," Andonovski said.

"Then after the opportunity was given to her, she took full advantage of it. Every game that she came in, whether it was five minutes, 10 minutes, 15 minutes, she maximized that opportunity and continue growing and developing in the league and performing in the league. So overall, we’re excited to have her on the team."

Kristie was selected to the U.S. team's original 18-player roster for the Olympics, the only player included who hadn't been on the team that won the World Cup. Olympic rosters were later expanded to 22 to include alternates.

The Mewis sisters are certainly not the only siblings competing in Tokyo.

Nelly Korda and older sister Jessica are among four women on the U.S. golf team. Younger brother Sebastian, who plays tennis, decided not to join the Olympic team and instead focus on preparing for the U.S. Open.

Nelly, 22, recently won the Women’s PGA Championship, giving her the No. 1 ranking in the world. Jessica, 28, is a six-time winner on the LPGA Tour.

After her first major victory, Nelly talked about the importance her sister brings to her game.

“She's 5 years older, so she has showed the ropes of the LPGA, the ropes of professional golf, and I've been super lucky to have been shown that because a lot of people don't get that opportunity,” Nelly said. “If I'm struggling, she's right there for me, and I can't thank her enough for everything she has done, and how selfless of a person she is.”

Sam Mewis, 28, says that having a sister on the team means she's got a built-in support system.

“I really am just so proud of her,” Sam said. "I think being on this team and being a professional soccer player, there’s so few people that understand what that’s like and the ups and downs of that. And I think for a lot of people, maybe their families or their closest friends, there’s just so few people that really get it. So to have my sister doing this alongside me, someone who really understands what we go through, what we do, how bad we want it, what we’re willing to give up to get it.

“I think it brings us so much closer and it’s awesome to have that support system here in this environment. So, I just feel so lucky and I’m just really so proud of her.”