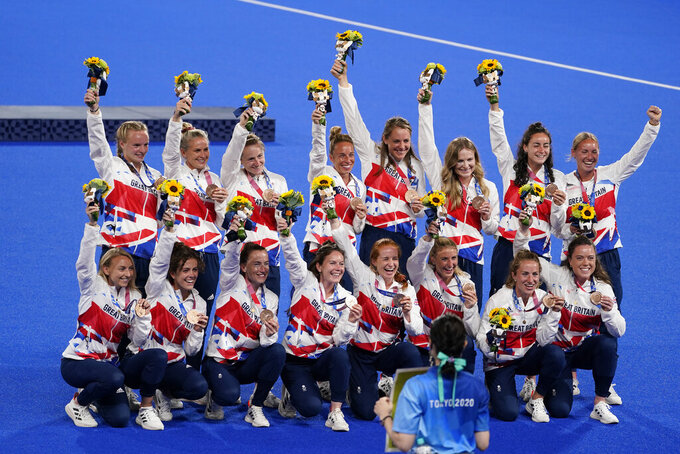 Team Great Britain poses for a photo with their bronze medal after the medal ceremony for the women's field hockey event during the 2020 Summer Olympics, Friday, Aug. 6, 2021, in Tokyo, Japan. (AP Photo/John Minchillo)

The Dutch rolled through pool play with a 5-0 record, outscoring their opponents 18-2. They won their quarterfinal 3-0 over New Zealand and their semifinal 5-1 over Britain.

Caia van Maasakker scored two goals for the Netherlands in the final. The Dutch settled for silver in 2016 and didn't want another disappointment.

“I’m so proud of the team and every individual,” Netherlands forward Lidewij Welten said. “It’s been five years since the last Olympics, and we trained so hard, and I think in every tournament we showed that we’re the best. But showing it on this stage as well makes me really proud.”

“That’s incredible,” Welten said. “It’s not something you’re busy with before the game but it’s like the cherry on the pie. It’s really incredible. We both have had an incredible career and still going, so that’s amazing. That makes me proud.”

Netherlands coach Alyson Annan became the first woman to win Olympic gold as a player and as a coach. She won as a player for Australia in 1996 and 2000.

“It’s nice, but it’s not why I do this,” Annan said. “My goal as a coach is to hopefully be a part of someone’s career and have them look back and say ‘That was a great time and I learned a lot and I became a better player and a better person.’”

The Netherlands’ Frederique Matla led all scorers in the tournament with nine goals, and teammate Felice Albers was second with six.

In the bronze medal match, Grace Balsdon scored the winner on a penalty corner early in the fourth quarter to help Britain defeat India 4-3.

“After the highs of Rio, we lost a lot of players, people retired,” Britain’s Laura Unsworth, a member of all three medal-winning teams, said. “It’s always hard because you’re the Olympic champions as the pressure’s on you.

“But as a squad we dug in so deep. We are so resilient, I am so proud of every single one of the girls.”

Britain jumped out to a 2-0 lead, but India scored three goals in a five-minute stretch late in the first half, including two by Gurjit Kaur, to take a 3-2 lead at halftime. Britain’s Hollie Pearne-Webb scored early in the third quarter to tie the match.

India’s men claimed bronze with a win over Germany on Thursday night, and the women came close to matching them.

“We didn’t win the medal, but I think we achieved something bigger, and it’s inspiring a country and make the country proud,” India coach Sjoerd Marijne said.

“And I’ve shown many messages of people who were saying that, and I think the world have seen another Indian team, and I’m really proud of that.”