New CEO of US skiing 'confident' of Olympic results, medals 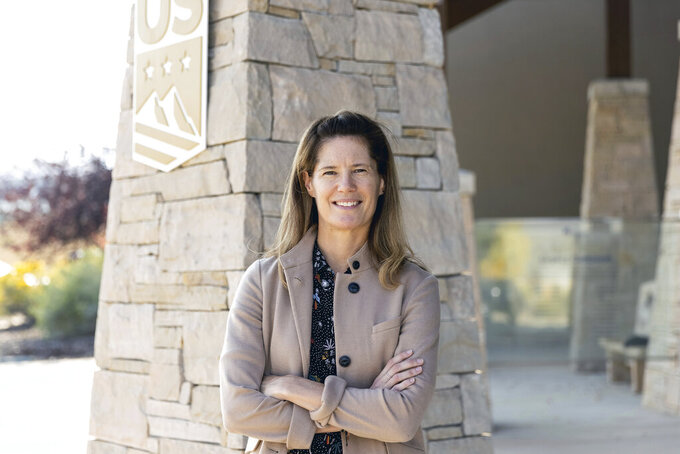 This Sept. 27, 2021, photo provided by U.S. Ski & Snowboard shows President and CEO Sophie Goldschmidt posed outside the USANA Center of Excellence in Park City, Utah. The new President and CEO of the U.S. Ski and Snowboard Association has vivid memories of her first time clicking into boots on a mountain in Chamonix, France, during a school trip at age 12. Sophie Goldschmidt’s best sport was always tennis — that’s what brought her from London to Baylor University on a scholarship — but the affinity for skiing stuck.(Sarah Brunson/U.S. Ski & Snowboard via AP)

The new president and CEO of U.S. Ski & Snowboard has vivid memories of her first time clicking into boots on a mountain in Chamonix, France, during a school trip at age 12. Sophie Goldschmidt’s best sport was always tennis — that’s what brought her from London to Baylor University on a scholarship — but the affinity for skiing stuck.

Now Goldschmidt runs the federation that will account for about half of the U.S. athletes headed to the Beijing Olympics in less than two months, and likely some of the biggest names, such as ski racer Mikaela Shiffrin and snowboarders Chloe Kim and Shaun White.

“We have internal goals that we don’t share publicly, because I think it just adds pressure to athletes and others, but we have process-oriented goals, medal goals, the number of athletes that actually qualify overall. ... So we’ve got those right measurements and processes in place,” she said Wednesday in a video interview with The Associated Press. “But we’re confident that we can deliver some really good results and hopefully a bunch of medals.”

Goldschmidt had been CEO of the World Surf League and her previous experience includes stints with the NBA, the Women's Tennis Association and golf's European Tour. Her hiring by U.S. Ski & Snowboard to replace Tiger Shaw as CEO was announced in September; she began working there in October, based in Park City, Utah.

Given the quick turnaround to the Winter Games, which open Feb. 4, Goldschmidt does not foresee any immediate moves.

“I have no set plans or changes that I’ve decided on at this stage. I think that would be putting the cart before the horse,” Goldschmidt said. “I think I’m bringing a lot of relevant experience to the role, but I’m also somewhat of an outsider, because I’ve never worked in snow sports. So I want to be very thoughtful. I’m not going to delay making changes as needed. But I also want to make sure that I really spend time learning, listening.”

During her time at the women's professional tennis tour, Goldschmidt said, she got to know Peng Shuai, the Grand Slam doubles champion from China who dropped out of public view last month after accusing a former high-ranking government official there of sexual assault in a social media post that quickly disappeared.

The WTA announced last week it would be suspending all tournaments in China until it can have contact with Peng and there is a full investigation into her allegations.

The issue has resonated with China set to host the Olympics.

“What happened to Peng ... was scary. ... There needs to be deeper understanding and direct, in-person communication, to make sure that that she’s OK,” Goldschmidt said. “But at this stage, our athletes, rightly so, want to be focused on their training, the competitions that are coming up and putting themselves in the best place possible to compete for the U.S. team and hopefully have success in Beijing. And I think that’s their job. ... Obviously at the end of the day, athletes are free to communicate however they want and we’re never going to limit or prevent them from having their voice. That goes against everything that we stand for.”