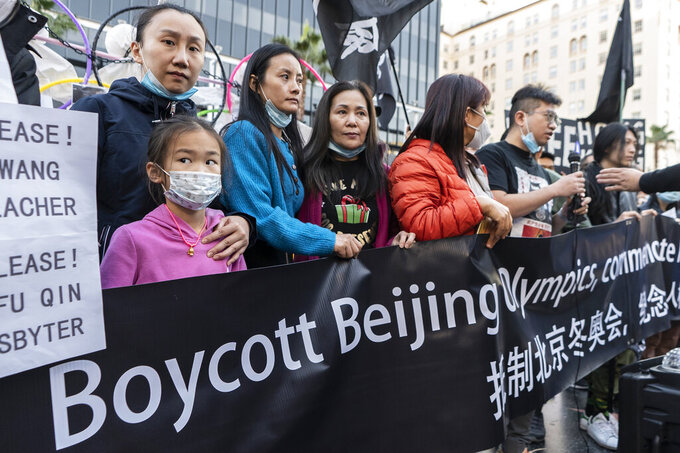 FILE - Protesters rally against the Beijing 2022 Winter Olympic Games on International Human Rights Day outside the TCL Chinese Theatre in the Hollywood district of Los Angeles on Dec. 10, 2021. The location of the Winter Olympics in Beijing is certain to draw global attention to acts of genocide against the Uyghur people committed by the Chinese government. (AP Photo/Damian Dovarganes, File)

China’s treatment of its Uyghur minority could come before the courts in Argentina at about the same time that the Winter Olympics open on Feb. 4 in Beijing.

Michael Polak, a British lawyer representing the World Uyghur Congress and the Uyghur Human Rights Project, is preparing a “universal jurisdiction criminal complaint” to submit to the criminal courts of Argentina in February.

“We think what we are doing in Argentina is the natural next step for moving towards justice,” Polak told the Associated Press in an interview.

Last week, an unofficial body set up in Britain to assess evidence on China’s alleged rights abuses against the Uyghur people concluded that the Chinese government committed genocide and crimes against humanity.

Additionally, the United Nations Office of the High Commissioner for Human Rights is expected to soon release a report on human rights in the Xinjiang region of northwestern China. In a statement, the U.N. said it had “similarly identified patterns of arbitrary detention, coercive labor practices and an erosion of social and cultural rights.” It also said it had been unable to gain “unfettered access” to the region.

Argentina agreed last month to hear a case against the Myanmar military involving the treatment of the minority Rohingya under the principle of “universal jurisdiction.” This principle holds that severe crimes can be tried in any jurisdiction.

“There are universal jurisdiction provisions in different jurisdictions around the world," Polak said. "But the Argentinian one is the most realistic because the courts are actually able to use it. And they are very keen on using it because of their own history. Realistically, the aim would be to bring these people before the Argentinian courts and for them to answer the allegations.”

The internment of an estimated 1 million or more Uyghurs and other largely Muslim minorities — in what China described as vocational training and education centers — has also put the focus on China's treatment of Tibetans, the loss of civil liberties in Hong Kong, and restrictions on use of the Mongolian language in China's Inner Mongolia region.

The U.S. government and parliaments in Britain, Belgium, the Netherlands and Canada have declared that Beijing’s policies against the Uyghurs amount to genocide and crimes against humanity.

“For the Uyghurs to swear their evidence in an Argentinian court is a huge moment,” Polak said. “We think it is realistic that arrest warrants can be issued and people can be arrested.”

During the tribunal, about 30 witnesses and experts gave evidence at a series of public hearings in central London earlier this year, alleging torture, forced abortions, rape and beatings by authorities while in state detention centers. The hearings also reviewed numerous documents detailing other policies including the separation of young children from their families and widespread destruction of mosques.

The panel of lawyers, business people, and academics concluded that China’s General Secretary Xi Jinping and other senior officials had “primary responsibility for acts in Xinjiang.”

The Chinese Embassy in London called the tribunal a “political tool used by a few anti-China and separatist elements to deceive and mislead the public.” The embassy said in a statement that the policies in Xinjiang were aimed at fighting terrorism and preventing radicalization.

A spokesperson for the Xinjiang region on Monday, anticipating the U.N. report, said “we will absolutely not accept the so-called human rights investigation report."

“We will not allow interference in Xinjiang affairs and China's internal affairs in the name of the so-called Xinjiang issues,” spokesperson Xu Guixiang added.

Polak said he expects China to use political leverage and financial pressure in Argentina to stop the court case. The court has to first agree to hear the case. If it declines, there is an appeal process.

“We think because of the strong evidence in our case, the Buenos Aires court should accept it and should investigate," Polak said.

“Everywhere we’ve taken the Uyghur case around the world, China tries to step in and stop it from happening," Polak added. "What we’ve seen of the Argentinian courts and their decisions, we think the courts are independent and will look at this and look at the evidence properly.”

Polak said the Argentine government was sensitive to these cases, given what happened in Argentina during the 1976-83 military junta. Thousands were tortured, killed and forcibly disappeared in a government-sponsored crackdown on leftist dissidents during Argentina’s so-called “dirty war.”

“We hope that the politicians in Argentina and civil society will see the parallels and some of their struggles and support what we are doing," Polak said. “Argentina has demonstrated this by prosecuting people within their own country.”