Osaka, Kenin, Swiatek pull out of US Open tuneup in Montreal 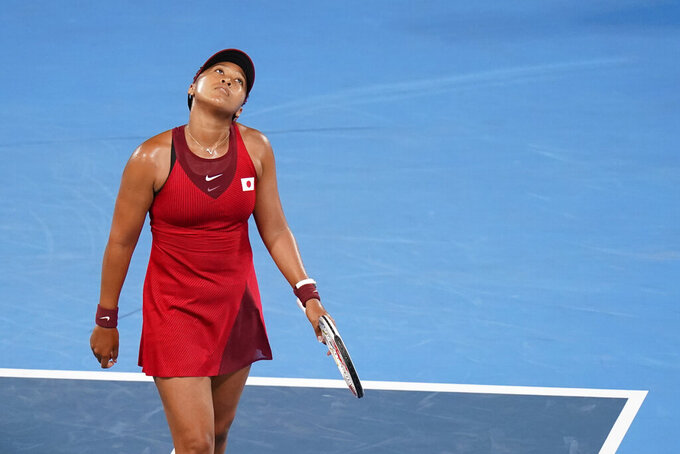 Naomi Osaka, of Japan, reacts during a third round women's tennis match against Marketa Vondrousova, of the Czech Republic, at the 2020 Summer Olympics, Tuesday, July 27, 2021, in Tokyo, Japan. (AP Photo/Patrick Semansky)

MONTREAL (AP) — Naomi Osaka pulled out of the National Bank Open hard-court tuneup to be played in Montreal this month ahead of the U.S. Open.

The tournament announced the withdrawals of Osaka and two other top-10 players who have won Grand Slam titles, Sofia Kenin and Iga Swiatek, on Tuesday.

Osaka is coming off a third-round loss at the Tokyo Olympics, where she had the honor of lighting the cauldron during the opening ceremony.

Before that, the 23-year-old Osaka had not competed anywhere since withdrawing before her second-round match at the French Open, citing the need for a mental health break. She also sat out Wimbledon entirely.

She is ranked No. 2 and is the owner of four major championships, all on hard courts, including this year's Australian Open.

The fourth-ranked Kenin, who won the 2020 Australian Open, has been sidelined by a foot injury since Wimbledon.

No. 8 Swiatek, last year's French Open champion, lost in the second round of the Olympics.