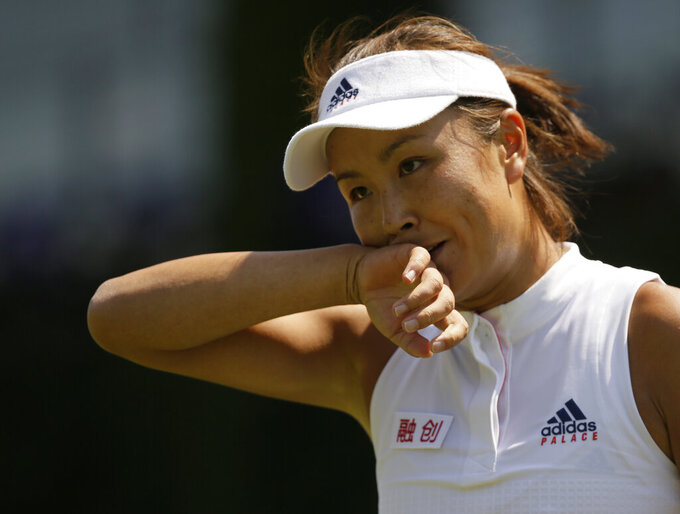 BEIJING (AP) — An employee of Chinese state TV has posted photos of missing tennis star Peng Shuai online in a new effort to dispel concern about her disappearance after she accused a senior leader of sexual assault.

The photos appeared Friday on Twitter, which cannot be seen by most internet users in China. The state TV employee, Shen Shiwei, wrote they were on Peng's account on the WeChat message service with the comment, “Happy Weekend.”

The ruling Communist Party faces mounting appeals from tennis stars and the sport's professional tour to prove Peng, a three-time Olympian and former No. 1-ranked women's doubles player, is safe and let her speak freely.

Meanwhile, the editor of a newspaper published by the party said Peng would “show up in public” soon.

The controversy is politically awkward as the Chinese capital prepares to hold the Winter Olympics in February. A Foreign Ministry spokesperson on Friday denied knowing about the outcry over Peng's disappearance.

Peng, 35, hasn’t been seen in public since posting a statement on social media this month accusing Zhang Gaoli, a former member of the party’s Standing Committee, the ruling inner circle of power, of forcing her to have sex despite repeated refusals.

Shen works for CGTN, the English-language arm of China Central Television that is aimed at foreign audiences. His Twitter post came after CGTN this week distributed a statement it said came from Peng that retracted the accusations against Zhang.

The editor of Global Times, an English-language newspaper published by the Communist Party, said on Twitter he had confirmed from unidentified sources that the photos “are indeed Peng Shuai’s current state.”

“In the past few days, she stayed in her own home freely and she didn’t want to be disturbed,” wrote the editor, Hu Xijin. “She will show up in public and participate in some activities soon.”

The photos showed Peng with a gray cat and holding a panda figurine in what appeared to be a private home with stuffed animals lined up behind her. There was no indication when the photos were taken.

Steve Simon, the chairman and CEO of the Women’s Tennis Association, reacted Saturday to a video purporting to show the tennis player at a restaurant.

“I am glad to see the videos released by China state-run media that appear to show Peng Shuai at a restaurant in Beijing. While it is positive to see her, it remains unclear if she is free and able to make decisions and take actions on her own, without coercion or external interference. This video alone is insufficient,” Simon said.

“As I have stated from the beginning, I remain concerned about Peng Shuai’s health and safety and that the allegation of sexual assault is being censored and swept under the rug. I have been clear about what needs to happen and our relationship with China is at a crossroads.”

Simon has threatened to pull the WTA’s events out of China. That means almost a dozen next year, including the WTA Finals.

Emma Terho, the chair of the International Olympic Committee Athletes' Commission, tweeted Saturday that the body "is very concerned about the situation of three-time Olympian Peng Shuai."

“We support the quiet diplomacy approach that is being taken and hope it will lead to the release of information about the whereabouts of Peng Shuai and confirmation of her safety and well-being,” Terho added.