Pressure on Dutch to continue winning ways at Olympic oval 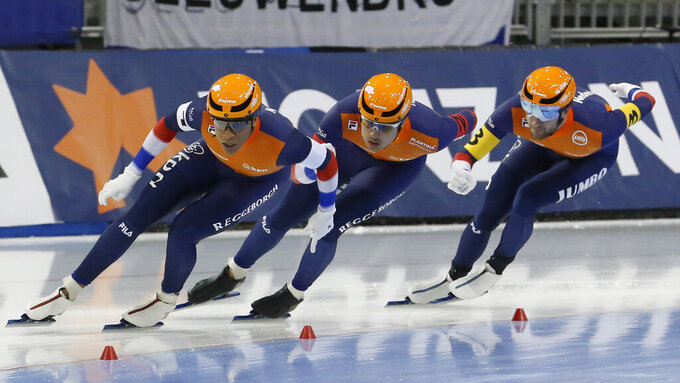 FILE - From left to right, Netherlands' Dai Dai Ntab, Kai Verbij and Thomas Krol race during the men's team sprint competition at the world single distances speedskating championships Feb. 13, 2020, in Kearns, Utah. Krol believed he was going to the Olympics four years ago. The speedskater finished third at the Dutch trials, and then politics intervened. The national federation named Verbij to the team for Pyeongchang. Verbij was injured at the trials and unable to compete in the 1,000 meters, but he was chosen over Krol. (AP Photo/Rick Bowmer, File)

Thomas Krol believed he was going to the Olympics four years ago. The speedskater finished third at the Dutch trials, and then politics intervened.

The national federation named Kai Verbij to the team for Pyeongchang. Verbij was injured at the trials and unable to compete in the 1,000 meters, but he was chosen over Krol.

Making it worse for Krol is that he and Verbij are best friends. Verbij headed to South Korea, finishing sixth in the 1,000, while Krol went home to his couch.

That’s how competitive speedskating is in the Netherlands, where it’s second only to soccer in national popularity. The Dutch have won a total of 121 Olympic speedskating medals, including 42 golds.

Just qualifying for the Dutch team is brutal because the talent level is so high, with many competitors first having honed their skills as children skating on the country’s frozen lakes and canals.

“If one falls away, the other one is already standing ready,” said Jorrit Bergsma, a two-time Olympic medalist in the 10,000.

Krol added, “It’s not just one country that skates really hard, but we have single islands. We don’t really train with each other because at the trials we just want to kick each other’s (rear).”

Eleven-time Olympic medalist Ireen Wüst and Sven Kramer, a nine-time medalist, didn’t win any events at the Dutch trials. But both are going to their fifth Olympics at age 35.

Wüst finished second and third in two events to qualify.

“I still have the same feeling since I was 19 doing my first Olympics,” she said. “I always want to show the best of me.”

Kramer finished third in the 5,000 — an event he has won at three straight Olympics — and was chosen by the federation, which values him in the team pursuit and mass start. Two other skaters who placed in the top three at trials were left off, similar to Krol’s fate four years ago.

While the rest of the competition was skating for medals during the fall World Cup circuit, the Dutch trained through those events with the goal of peaking for their trials last month.

Now, they’ll need to be at their best barely a month later in Beijing.

“History shows it doesn’t have to be a problem,” Bergsma said.

Dutch skaters have bagged the most medals at the speedskating oval going back several Olympics. They earned a leading 16 medals — including seven gold — four years ago. They were even better at the 2016 Sochi Games, claiming 23 medals with eight gold.

While skaters in other countries struggle to train and earn a living at the same time, the Dutch have sponsors to fund their lifestyle. In a pre-COVID-19 world, it was common for 10,000 fans to pack the stands. The Dutch receive a lot of media attention, too, with camera crews traveling to their overseas competitions.

“I can live pretty well from it. That really helps me to focus on skating,” Krol said. “The professionalism of the sport is really high in the Netherlands.”

At times, the pressure to succeed can be overwhelming. Femke Kok found that out as an eight-time junior world champion.

“Last year was the first year I skated good, so now everyone expects you to skate hard and really fast,” the 21-year-old sprinter said. “But sometimes you just can’t and then you have questions like, ‘Why do you skate that bad?’”

Krol watched the Olympics in 2018, describing it as “really painful.” Adding to his misery was a demand from his sponsor that he provide television commentary for the 1,000.

After that bitter disappointment, Krol changed teams and his mentality. He got stricter with himself and it paid off the following year. No longer was he merely on the podium, he was in the top spot winning world and European titles.

Now, at 29, he’ll compete in his first Olympics.

Kok will try to deliver the Netherlands’ first-ever gold in the women’s 500.

“Of course, we try to win everything always,” she said, smiling.