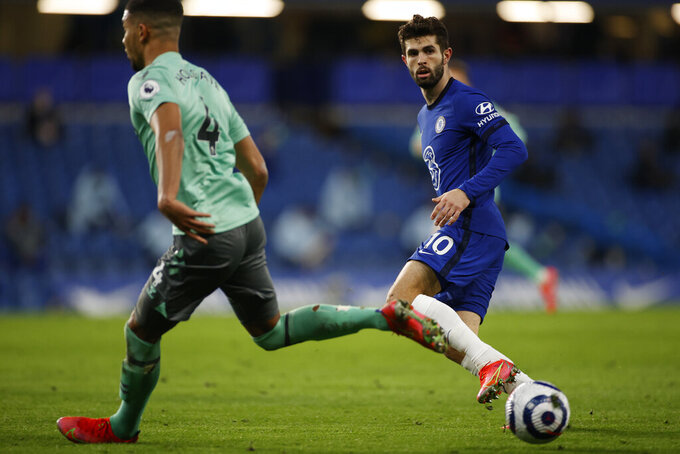 Chelsea's Christian Pulisic, right, in action during the English Premier League soccer match between Chelsea and Everton at the Stamford Bridge stadium in London, Monday, March 8, 2021. (John Sibley/Pool via AP)

Christian Pulisic is confident of regaining a regular role with Chelsea and would like to play for the U.S. at the Olympics while realizing he may not be released for them.

Pulisic is with the U.S. national team for the first time since October 2019 ahead of exhibitions against Jamaica on Thursday at Wiener Neustadt, Austria, and on Sunday at Northern Ireland. The 22-year-old midfielder and forward from Hershey, Pennsylvania, has had a difficult second season with Chelsea, missing the start of the season because of an injury, then struggling to gain playing time since Thomas Tuechel replaced manager Frank Lampard.

“It hasn’t been the easiest thing,” Pulisic said Wednesday at U.S. training camp in Austria. “Obviously, I’m a guy who always wants to play.”

The U.S. under-24 team will play a one-game match on Sunday in Guadalajara, Mexico, most likely against Canada or Honduras, in an attempt to reach the Olympics for the first time since 2012. Clubs do not have to release players for the Olympics, which overlap the start of the 2021-22 European season.

“To represent your country in an Olympics would be amazing,” Pulisic said. “It’s something I’ve thought about and I have wanted to play in. Obviously I can’t control exactly what goes on and what is best for me at the time and what’s best for the team at the time.”

U.S. national team coach Gregg Berhalter made an Olympic appearance sound unlikely for Pulisic and other Americans with European clubs. His priority is the eight World Cup qualifiers next fall. Olympic soccer is limited to players under 24 with the exception of three wild cards over the age limit.

“We have to sit and have conversations with these clubs,” Berhalter said. “It’s an uphill battle that we’re fighting. If we were in a perfect world, there is nothing more I’d like to see than the best group compete in the Olympics."

Pulisic is the top American player in the post-Landon Donovan and Clint Dempsey era, scoring 14 goals in 34 international appearances. Leader of the player pool as it emerged from the failure to qualify for the 2018 World Cup, he is part of a young generation that includes Weston McKennie and Tyler Adams, who are absent from this week’s training camp.

“I’m very excited to be back with the team,” Pulisic said. “First of all, I always love just being able to play for my country and get it back with these guys.”

The coronavirus pandemic limited the U.S. to just two games on FIFA dates last year, and Pulisic missing those while recovering from injury.

He scored in the FA Cup final against Arsenal on Aug. 1, capping a season in which he scored 11 goals in 34 games, but he injured a hamstring during the second half and didn’t make his 2020-21 season debut until Oct. 3.

Pulisic started seven straight league matches this season under Lampard, who was fired and replaced by Tuechel on Jan. 26. Teuchel did not include him as a starter for his first 1 1/2 months.

“He is in my plans, and he is an important player,” Teuchel said on March 12. “He has the potential to be decisive for us from the bench. And as a beginning, is it necessary he can prove it? Yes. So this is my job, and his job is to be ready, to be ready like everybody else. And comes the moment, you have to be ready. This is what you sign up for in a club like Chelsea.”

Teuchel, Pulisic’s coach at Borussia Dortmund from 2015-17, did not start Pulisic in the Premier League until March 13 against Leeds. Pulisic got his second start under Teuchel last weekend, putting in a strong effort in a 2-0 win over Sheffield United in an FA Cup quarterfinal.

“I was in a similar situation, I think, when I first came to Chelsea," Pulisic said. “So I had to work my way and my position in the team to finally get some minutes. And I feel like I did that. And I feel like I’m basically going out there and I’m trying to do the same thing now.”

Berhalter hopes Pulisic is invigorated by training with the national team.

“Sometimes this can almost be like a kick-start for the player,” he said. “I know he has the resiliency to keep going. And I know it’s a matter of time before he breaks through. He’s a fantastic player and his qualities will show through, as they did the last game in the FA Cup that we saw.”

Teuchel used Pulisic at right wing back against Leeds, then shifted him to an outside attacking position against Sheffield United. Berhalter has used him in advanced central and wide roles.

“One thing that I know about Christian is (he's) very, very good one versus one. He’s good receiving between lines. He’s good attacking the defense,” Berhalter said. “And that’s what we want to do, is put him in position to do that. And we may play a different formation next game to see if we can get him in some of those positions. But we also feel like in normal 4-3-3 that we’ve playing, that he’s able to get in those positions as well. So I think when you have a talent like Christian, part of it is the team adapting to him and finding ways to put him in position to unbalance the defense because he does that so well.”