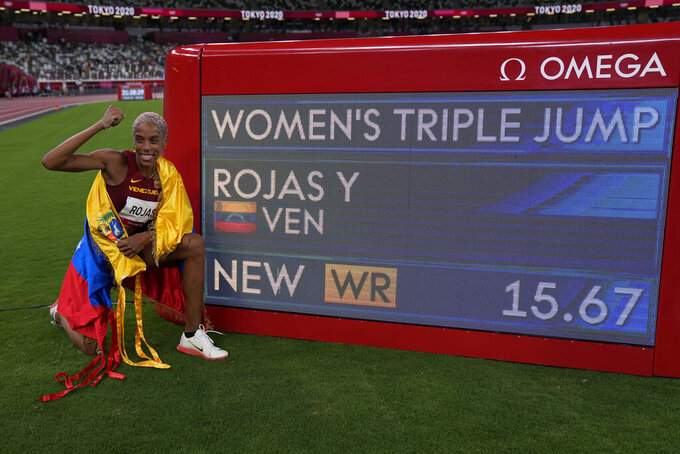 Yulimar Rojas, of Venezuela, celebrates after winning the final of the women's triple jump at the 2020 Summer Olympics, Sunday, Aug. 1, 2021, in Tokyo. (AP Photo/David J. Phillip)

The runway, the take off, the way she hit the sand — it all felt so good she somehow knew she'd sealed her Olympic gold medal in the women's triple jump with a world record.

Rojas broke the Olympic record in the first round of Sunday's final at the Tokyo Games, signaling her intent.

She went through four more rounds before putting it all together perfectly with a mark of 15.67 meters on her last attempt, improving on the old mark of 15.50 that Inessa Kravets of Ukraine set in 1995.

“I knew. I already knew. I knew from the run. I knew I couldn’t miss that one. I knew it was right there,” she said of her last jump. “I didn’t even have to look. My head, my heart, my body.”

In an almost empty stadium, there were also auditory clues.

“I was also listening: people went ‘wow.' I could hear my friend screaming,” she said. “My coach was screaming, was yelling.”

Rojas already had the gold medal assured — with that Games record of 15.39 — when she took the last of her six attempts, giving her a feeling of freedom.

The celebrations really kicked off when, after her initial reluctance to look, she confirmed the record with a glance at the stadium screen. She later posed for the obligatory photo beside an in-field board that registered the event, her name, and the official distance with WR beside it.

Patricia Mamona of Portugal took silver with a national record of 15.01 meters. Ana Peleteiro, who trains with Rojas, set a Spanish record of 14.87 to win the bronze.

Rojas was a silver medalist at the 2016 Olympics in Rio de Janeiro and won back-to-back world championships in 2017 and '19.

A first Olympic gold for a Venezuelan female athlete was due.

“When I woke up this morning, I already knew today was going to be a good day,” Rojas said. "I had a very positive vibe — I knew today things could be great, today I was going to write history.