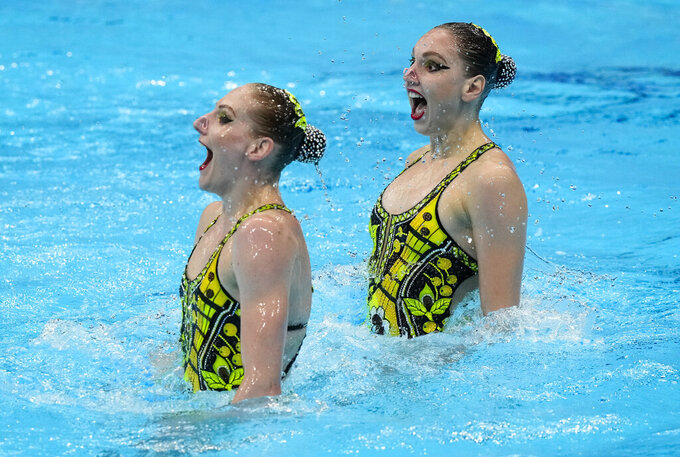 Svetlana Kolesnichenko and Svetlana Romashina of the Russian Olympic Committee compete in the duet technical routine at the the 2020 Summer Olympics, Tuesday, Aug. 3, 2021, in Tokyo, Japan. (AP Photo/Dmitri Lovetsky)

TOKYO (AP) — Russian Svetlana Romashina will go for her record sixth gold medal in artistic swimming Wednesday after leading the preliminaries of duet.

Romashina teamed with Svetlana Kolesnichenko to post the top scores in both free and technical routines.

Their performance to “Kalinka" by Little Big gave them a score of 97.1079 in the free routine Tuesday night. They advanced to the final at the Tokyo Aquatics Centre as overwhelming favorites with the top combined score of 195.0079.

The Russian pair was followed by China's Huang Xuechen and Sun Wenyan (191.7832) and Ukraine's Marta Fiedina and Anastasiya Savchuk (188.7953). The top 12 teams advanced to the final.

The U.S. duo of Anita Alvarez and Lindie Schroeder finished 13th and failed to qualify.

Evangelia Papazoglou and Evangelia Platanioti withdrew because of a COVID-19 outbreak within Greece's artistic swimming team. They were tied for 10th after the free routine.

The Greek squad, which had also been due to compete in the team event, was asked to leave the Olympic Village after four positive cases were reported.

The 31-year-old Romashina is tied for the most gold medals in the sport’s Olympic history with fellow Russians Anastasia Davydova and Natalia Ishchenko.

Romashina teamed with Ishchenko to win duet gold at the past two Olympics.

The Russians have dominated the sport formerly known as synchronized swimming for more than two decades. Their last Olympic loss came at the 1996 Atlanta Games.