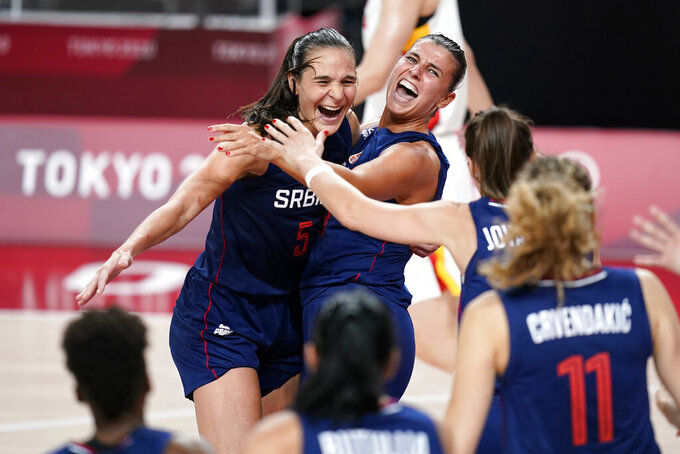 Serbia's Sonja Vasic, left, and Ana Dabovic celebrate at the end of a women's basketball quarterfinal round game against China at the 2020 Summer Olympics, Wednesday, Aug. 4, 2021, in Saitama, Japan. (AP Photo/Charlie Neibergall)

Standing closer to the Olympic rings logo at half-court than the 3-point arc, Dabovic knocked down a huge shot, keying the rally the helped Serbia beat China 77-70 Wednesday to reach a second straight semifinals.

“That’s what she does,” Serbia forward Jelena Brooks said of Dabovic. “Comes in at clutch moments and she can hit those shots. She does it all the time. It’s not a shot that comes by accident. She knows the right moment.”

Dabovic said it's not a shot she practices often, but she likes “to make those shots.”

The Serbians (3-1) now will play the United States, a 79-55 winner over Australia, in the semifinals on Friday and hope to improve on the bronze they won at the 2016 Rio Games.

At the final buzzer, they gathered in a circle on the court and danced and hugged in celebration after rallying from a nine-point deficit for the win. Dabovic's 3 fueled the comeback as part of 12 straight points to open the fourth quarter, and Serbia wound up outscoring China 28-12 to advance.

Serbia coach Marina Maljkovic wouldn't share what she told her team before the fourth quarter except that she wanted more energy. She liked the way they responded.

“They listened and that definitely was the key," Maljkovic said.

China (3-1) went undefeated in pool play and led 58-49 at the end of the third quarter. With Yao Ming, president of the Chinese Basketball Association, watching from the bench, the Chinese missed reaching the semifinals for the first time since the 2008 Beijing Games.

“I do see a lot of potential for this team. I feel comfortable and encouraged and I believe that our team is going to go far in the future,” Xu said.

Han Xu's layup tied it up at 70 with 2:13 left. Sonja Vasic hit two free throws with 1:53 to go, giving her nine straight points and putting Serbia ahead to stay.

China came in with a decided height advantage with three players 6-foot-6 or taller, including the 6-9 Han; Serbia's tallest player is 6-5 Dragana Stankovic. That didn’t stop Serbia from outscoring China in the paint 38-24 despite being outrebounded 37-33.

China came in shooting 37.5% from 3-point range, third best in pool play. The shots didn't fall early in this game as the Chinese missed their first nine 3s. Sun Mengran finally knocked the first down with 6:12 left in the second quarter.

The Chinese couldn't have started better at the free throw line. China made all six attempts in the first half, then made the first nine in the quarter until Shao missed the first of her two attempts with 6 seconds left.