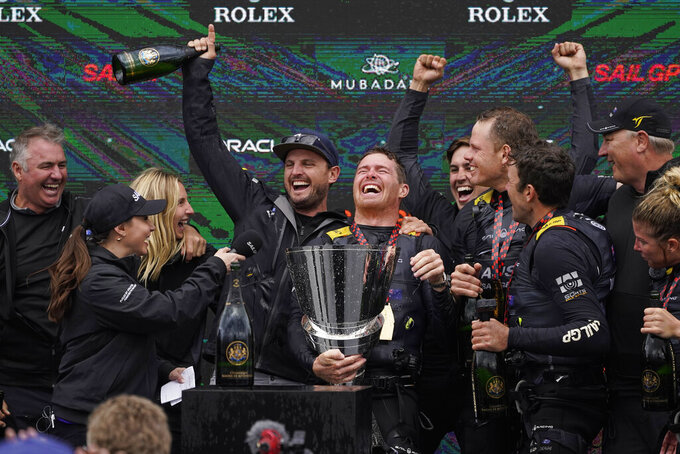 FILE - Team Australia, with Tom Slingsby holding the trophy, celebrates after winning the $1 million, winner-take-all Season 2 finale of the Mubadala United States Sail Grand Prix, on March 27, 2022, in San Francisco. The Champagne showers from Team Australia's Season 2 championship have barely dried and it's already time for SailGP to start another dash for $1 million in cash. The third season of tech tycoon Larry Ellison's global league starts this weekend on the turquoise water of Bermuda's Great Sound, where, to no one's surprise, Tom Slingsby's juggernaut Aussie crew remains the one to beat. (AP Photo/Eric Risberg, File)

The Champagne showers from Team Australia’s Season 2 championship have barely dried and SailGP is already starting another dash for $1 million in cash.

The third season of tech tycoon Larry Ellison’s global league begins this weekend on the turquoise waters of Bermuda’s Great Sound. To no one’s surprise, Tom Slingsby’s juggernaut Aussie crew remains the one to beat.

Slingsby, an Olympic gold medalist and former America’s Cup champion, has skippered the Flying Roo 50-foot foiling catamaran to the first two championships, each coming with a $1 million winner-take-all prize.

The fleet expands this season with new teams from Canada and Switzerland, although Japan — which reached the podium race the first two seasons — has run into financial difficulties and will miss the first three regattas. The number of regattas has increased to 10.

The Aussies clearly remain the class of the fleet and are aiming at a three-peat.

“It’s hard to say how we’re going to go but we’re as confident probably as we ever have been,” Slingsby said. “If we sail as well as we know we can, we can win races and win events. We’re in a really good position in that we don’t need to do anything special to win. We just need to do what we’ve done time and time again and we know that our best can beat other teams’ best and I’m not sure they have that same luxury.”

Nicknamed “Red Mist” for his occasional flashes of temper on the water, the redheaded Slingsby expertly steered the Flying Roo — named for the big yellow kangaroo on the wingsail — to sailing’s biggest cash prize for the second time since 2019. He beat Japan and the United States in the grand finale of the pandemic-delayed second season in San Francisco on March 27.

“When we’re in a tight situation or a high-pressure moment I know that these guys perform under pressure and I think they know that I do, also,” he said.

Slingsby was hired last week by America’s Cup syndicate American Magic. He’ll continue on in SailGP since the next America’s Cup isn’t until 2024.

Slingsby said Friday that Team Australia will donate $72,000 AUD, or about $50,000 US, from the team’s $1 million prize to its Race for the Future partner, Parley for the Oceans, to assist with remote expeditions and cleanups of marine plastics pollution throughout Australia’s beaches and coastlines.

Team USA, meanwhile, is looking for more consistent results even though it reached the grand finale in Jimmy Spithill’s first year as skipper. The American boat had a number of capsizes and crashes, including one in which wing trimmer Paul Campbell-James broke a leg.

“Given the mayhem we had to deal with and the fact we qualified for the final, I thought it was a good first step but definitely not something we’re satisfied with,” said Spithill, an Australian who lives full-time in San Diego with his American wife and their two sons. “We want to be at the top of the podium for sure. But like any sport there is no shortcut. You’ve got to put the time in, the hours in, and try to catch who I believe is the benchmark team, clearly, is the Aussies. They’ve been together longer than anyone. That group is really so locked in for a significant amount of time and it really shows. They are doing a lot of things well.”

Flight controller Rome Kirby was injured during a nose-dive in San Francisco and will miss this regatta, so the US team is bringing in Hans Henken as flight controller. Henken was with the American team in the inaugural season in 2019. He is literally a rocket scientist, holding bachelor’s and master’s degrees in aeronautical and astronautical engineering from Stanford. Luke Muller, who sailed in the Tokyo Olympics, will serve as backup to grinder/tactician Andrew Campbell.

Spithill, a two-time America’s Cup winner with Oracle Team USA, said he realized the team needed to build some depth.

“The long-term goal of the U.S. team is to return it back to the powerhouse the U.S. was in, let’s say, the 80s and 90s,” said Spithill, who co-helmed Italy into the America’s Cup match last year before losing to Emirates Team New Zealand. “It’s no secret. The results do the talking. You look at the last America’s Cup, you look at the last Olympics, the U.S. just wasn’t there. Our strategy is to continue to add depth, add talent, to the roster.”