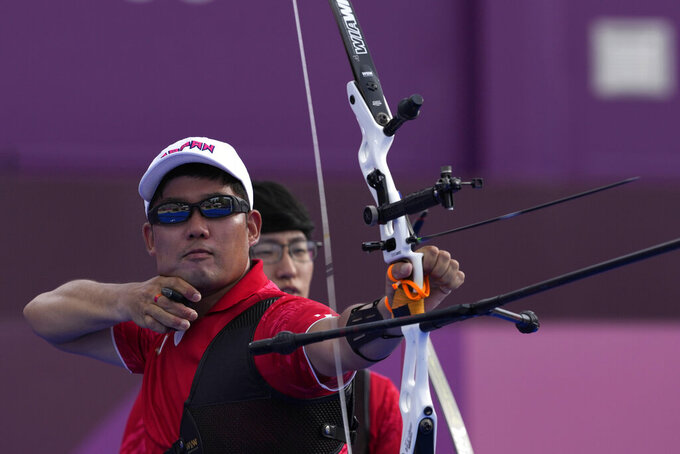 TOKYO (AP) — The teenager just couldn't stay still. He was constantly moving around and applauding his older South Korean teammates on good arrow shots (of which there were many).

In turn, the veterans fed off 17-year-old Kim Je-deok’s youthful spirit — and relied even more on his clutch arrow shooting (of which there was plenty).

Led by the steady shooting of the nation's newest standout, South Korea defended its Olympic men's archery team title at the Tokyo Games on Monday. He came up big in the semifinals to hold off host nation Japan and then again in a 6-0 win over Taiwan during the gold-medal match at Yumenoshima Park Archery Field.

“The hero of today,” 39-year-old Oh Jin-hyek said of his younger teammate. “Every time we had any challenges and difficulties, he shot the bull’s-eye and got the perfect score. He really lifted our morale.”

So much energy, too. Then again, that's precisely what Oh and fellow veteran Kim Woojin wanted.

“The two told me, ‘Let’s go crazy today. Let's be a crazy team,’” Kim Je-deok said. “If we're too anxious we might not get the intended results. So let’s try to keep up our morale and keep up our spirits.”

He had a vivid dream before the match, too, about fighting with his friend.

Close. It turned out to be “alongside” and “with friends."

“We’re all able to get along,” Kim Woojin, 29, said of the bond despite the age difference. “Je-deok didn’t seem to feel uncomfortable around us. Je-deok was always cheering us on.”

One of the tricky things was trying to figure out an inconsistent wind on the eve of a possible typhoon moving into the region. The impending high wind and rain has already led to moving some of Tuesday's matches to a different day.

But South Korea had no trouble with the variant breeze in the final, scoring a 10 on 13 of their 18 arrows to take home the nation’s sixth overall Olympic gold medal in the men’s event.

“He was a great asset to the team and very grateful for him,” Oh said of the youngster.

This was also the second gold in three days for Kim Je-deok. He helped South Korea win in the Olympic debut of the mixed team competition. His powerhouse archery nation is now 3 for 3 in gold medals at the Tokyo Games. The women's team won Sunday.

The Taiwanese team made up Deng Yu-Cheng, Tang Chih-Chun and Wei Chun-Heng beat China and the Netherlands before falling to South Korea. Taiwan's men's team falls to 4-13 all-time in head-to-head matchups with South Korea.

“Of course, I wish to have had a better result,” Deng Yu-Cheng said. “I’m quite satisfied.”

In the bronze-medal match, Hiroki Muto helped Japan beat Netherlands in a shoot-off with a walk-off arrow that nearly landed in the heart of the target. He was hugged by teammates Takaharu Furukawa and Yuki Kawata.

The match before, Japan lost in a shoot-off to South Korea, with Kim Je-deok’s arrow being closest to the center.

So close to an upset.

The South Korean men's team has now won a medal in eight of the last nine Olympics. The lone exception was a fifth-place showing at the 1992 Barcelona Games.

“Their (South Korea) archery is set up like our Major League Baseball or our NFL is,” said U.S. archer Brady Ellison, whose team was eliminated by Japan in the quarterfinals. "The only way someone’s going to be able to beat Korea is to have a team step up and outwork them. No one’s done that yet.”

On the horizon, some possible bad weather. The Olympic archery schedule was adjusted for Tuesday — just in case. The morning sessions involving first- and second-round individual matches were delayed until noon local time and the afternoon session postponed. The plan is to make up the matches Wednesday and Thursday.

The individual finals for the men and women at the Tokyo Games are still scheduled for Friday and Saturday.