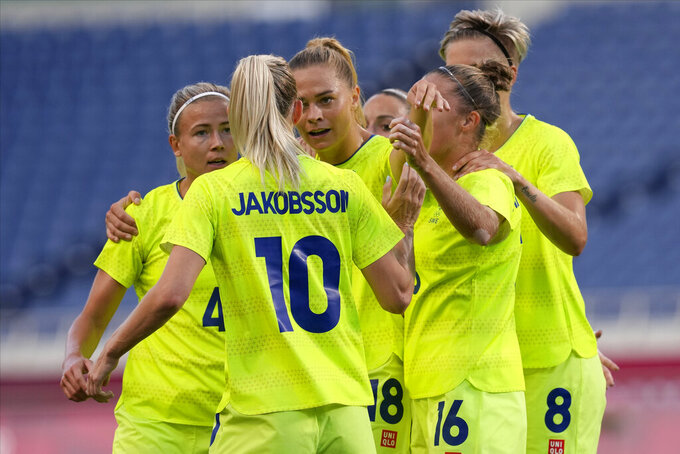 SAITAMA, Japan (AP) — Fridolina Rolfo scored a pair of goals and Sweden won its second straight match in the group stage of the women's Olympic soccer tournament with a 4-2 victory over Australia on Saturday.

Sweden, sitting atop Group G, opened the Tokyo Games with a 3-0 victory over the United States. It was the Americans' first loss since January 2019, snapping a 44-match unbeaten streak.

Rolfo scored on a cross from Sofia Jakobsson to give Sweden the early lead against the Matlidas in the 20th minute.

Australia tied it on Sam Kerr's header, which bounced off goalkeeper Hedvig Lindahl's leg and over the goal line in the 36th. Kerr added a second goal at the start of the second half, her third of the Olympics.

Lina Hurtig then scored on another well-placed cross from Jakobsson to tie it again, and Rolfo's blast from distance put the Swedes back in front in the 63rd.

Lindahl stopped Kerr's penalty in the 69th before Stina Blackstenius, a second-half substitute, put it out of Australia's reach in the 83rd. It was her third goal of the Olympics.

Sweden is now 8-1-4 against Australia since 1995. The two sides played to a scoreless draw in June in a friendly.

Australia was coming off a 2-1 victory over New Zealand in it's opener. It was the Matildas' first win of 2021.