Three teams from US group advance to Olympic semifinals 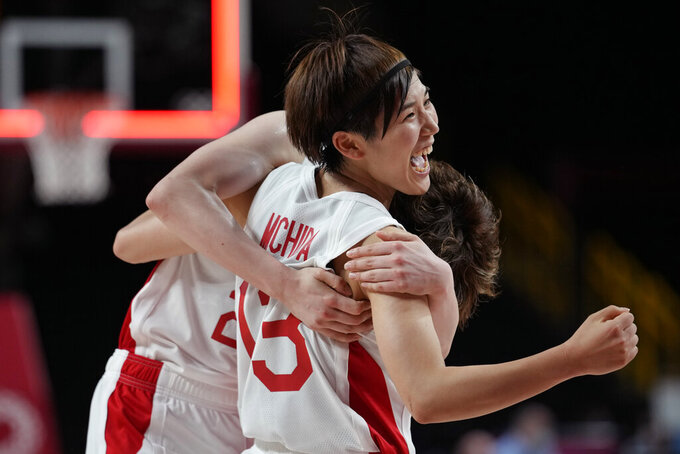 SAITAMA, Japan (AP) — A dominant performance in the quarterfinals by Breanna Stewart and her U.S. teammates has left the team two victories away from winning a seventh consecutive Olympic gold medal.

Next up is Serbia, the 2016 Rio Games bronze medalists. The other semifinal game Friday will feature a rematch of group play with France facing Japan — teams that the U.S. struggled against at times to beat.

“It's a mark of our pool. The games not only helped us, but Japan and France and even Nigeria. It was pretty cool to see that happen,” U.S. coach Dawn Staley said of having three teams from the same pool reach the semifinals.

There isn't much Olympic history between the U.S. and Serbia; the Americans came away with a 26-point win in their lone meeting in 2016. Several of the U.S. players are familiar with their opponent, however, having played on teams with them overseas during the WNBA offseason.

The teams did play in an Olympic qualifier in 2020 before the world shutdown for the coronavirus. The Americans came away with a 19-point win.

“They are a team that never stops. They are physical,” said Stewart, who scored 20 of her 23 points in the first half in the win over Australia in the quarterfinals. “They play inside and out. I'm looking forward to competing against them.”

The Americans had slow starts against opponents to open the Olympics, trailing after the first three quarters in all three pool play games — including matchups against France and Japan. That changed in the quarterfinals as the U.S. jumped out to a 14-point lead and never looked back against Australia.

“We're happy that we played well. It has nothing to do with the score, but how it felt," Bird said. "That's why all of us will go to sleep feeling good. But it doesn't mean anything for the semis.”

Serbia advanced to the semifinals by rallying past China. The Serbians are led by Sonja Vasic and Ana Dabovic, who played in the WNBA for a brief time. The pair helped Serbia rally from a nine-point deficit in the fourth quarter.

“We definitely do not want to stop here," Serbia coach Marina Maljkovic said. "We definitely want to continue and try to bring this medal to our country that we love so much.”

The other semifinal will be a rematch of a pool game that Japan won 74-70.

“The game we played against Japan was not us,” said Gabby Williams, who hit three of four free throws in the final 81 seconds to help France beat Spain in the quarterfinals. “I think this is the best basketball we’ve been playing.”

Japan had the most thrilling victory in the quarterfinals edging Belgium 86-85 on a 3-pointer with 15.2 seconds left. It's the first time that the Japanese team has ever reached the medal round.

Coach Tom Hovasse has turned the program around since taking over in 2017. He isn't just looking for the country's first medal in basketball, he predicted when he took the job that Japan would win a gold, beating the U.S.

“At my press conference four years ago, I told the media I wanted to beat America and win a gold medal and they thought I was crazy.” he said. “They don’t think I'm crazy anymore.”