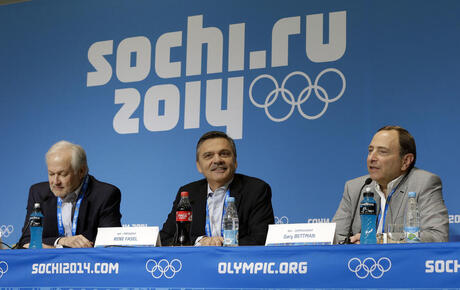 The head of the International Olympic Committee is joining high-level talks over whether the world's best hockey players will participate when the South Korea Winter Olympics begin 12 months from now, two people familiar with the meeting told The Associated Press on Thursday.

The IOC and the International Ice Hockey Federation requested a meeting Friday with NHL Commissioner Gary Bettman and NHL Players Association Executive Director Don Fehr, the people said on condition of anonymity because the development was not formally announced.

The meeting is the first to include IOC President Thomas Bach, IIHF President Rene Fasel, Bettman and Fehr regarding the NHL's participation in the 2018 Olympics, they said.

Fasel has been talking and meeting with Bettman and Fehr for months, trying to make sure the top hockey players compete in a sixth straight Olympics.

"If the status quo remains, I don't expect us to be in the Olympics," Daly said during last weekend's All-Star break.

The NHL has been the only professional sports league that pauses its season to allow its athletes to participate in the Olympics. It simply might not be willing to do that again next season.

The IOC has provided some compensation in the past, paying for travel and insurance expenses to get hockey's best to each Winter Olympics since 1998. The IOC, though, doesn't want to continue that practice. It spent about $14 million to cover travel and insurance for NHL players for the 2014 Olympics in Russia. Even if travel and insurance costs are covered, however, there's no guarantee the league and union will agree to go to South Korea.

While Friday's meeting might move the parties closer to a decision, it might take months for it to be resolved. Before the last Winter Olympics in Russia, a decision was not made until the previous summer.

The NHL is hoping to have a resolution sooner than later so that it can set next season's schedule.

Pyeongchang is 14 hours ahead of New York, making it difficult for TV viewers in North America to watch the games, and South Korea isn't a market the NHL is as excited about as China's in the 2022 Olympics.

Most players have expressed interest in playing for their home nations and competing for Olympic gold. Washington star Alex Ovechkin has said that he would play for Russia in Pyeongchang even if the NHL doesn't stop its season for players to participate.

Capitals owner Ted Leonsis said he will support Ovechkin and others if they choose to defy the league's wishes next year.

"It's a players' league," Leonsis said Wednesday. "If Alex Ovechkin and Braden Holtby and Nick Backstrom tell us, 'We want to go play for our country,' how am I going to say no? I might get fined. I might get punished in some way, but I feel I'm in partnership with Nick and Braden and Alex. It's a tough decision."