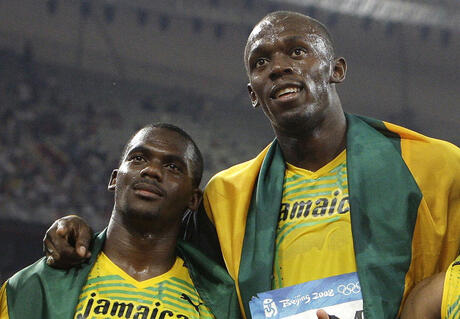 MELBOURNE, AustraliaCopyright 2020 The Associated Press. All rights reserved. This material may not be published, broadcast, rewritten or redistributed.
-37.814144.963

MELBOURNE, Australia (AP) — Usain Bolt says he is resigned to the fact that he's lost one of his nine Olympic gold medals, but isn't holding any grudges against drug-tainted Jamaican relay teammate Nesta Carter.

Carter has said he will appeal after re-analysis of his sample from the 2008 Beijing Games using more advanced scientific methods returned a positive test to the prohibited stimulant methylhexaneamine.

The result announced by the International Olympic Committee last week meant Jamaica was stripped of the 4x100-meter relay gold, one of Bolt's unprecedented three gold medals at three consecutive Olympics at Beijing, London in 2012 and Rio de Janeiro last year.

Bolt and fellow Jamaican sprinter Asafa Powell arrived in Melbourne on Wednesday for a Nitro Athletics meet which begins Saturday.

"Initially (I was) disappointed, of course," Bolt said at Melbourne airport.

"But in life, things happen ... I'm not sad, I'm waiting to see if Nesta is going to appeal or whatever," Bolt added. "So right now I'm just waiting to see what's going to happen. But I gave up my medal."

Carter teamed with Bolt on three straight world championship relay-winning teams, from 2011 through 2015. He also took an individual bronze in the 100 in 2013 in Moscow, behind Bolt and Justin Gatlin of the United States.

Carter, who did not compete at the Rio de Janeiro Olympics last year, faces a ban from the IAAF.

Bolt, Powell and Michael Frater, the fourth member of the relay team which crossed the line in a world record time of 37.1 seconds at the Beijing Games, are all in Melbourne to compete in the Nitro Athletics series.

The meet held over three nights will feature six teams of 24 track and field athletes — 12 women and 12 men — from Australia, an international team representing the Bolt All-Stars, China, England, Japan, and New Zealand.

Former 100-meter world record holder Powell also served a doping ban in 2014 after testing positive to the stimulant oxilofrine, although his sanction was reduced from 18 months to six following a successful appeal to the Court of Arbitration for Sport.

"We went out there as a team and we did what we had to do," Powell said Wednesday.

"It's very unfortunate and we have to look to the future. We've accomplished a lot and we just need to be positive about everything right now. I'm in no position to say what should and should not be (banned). It is what it is. Some things aren't fair."