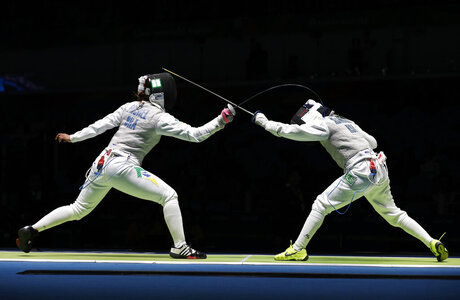 By: JOHN LEICESTER (AP)
RIO DE JANEIROCopyright 2020 The Associated Press. All rights reserved. This material may not be published, broadcast, rewritten or redistributed.
-22.9028-43.2075

Instead of pride, the fencer wore the face of humiliation. Her bout, make that rout, at the Rio Games lasted just 1 minute and 44 seconds. Too quick to enjoy; long enough to hurt.

Afterward, waiting in rain for a minibus to whisk her away from a fight, but hopefully not an experience, to forget, al-Omair wasn't in the mood for sharing her feelings about becoming the first Saudi woman to fence at an Olympics.

"Does she look like she wants to talk?" said her minder, waving this reporter away.

No, frankly, she didn't. Instead, al-Omair looked like another Saudi butterfly crushed by the wheels of discrimination.

Handing out wild cards for token Saudi women to participate at the Olympics is billed as a well-meaning effort to promote female sport. But, at the second games where this has happened, it still feels like a sham. The simple fact, proven first at the 2012 London Games and now in Rio de Janeiro, is that inviting courageous but clearly ill-equipped women from a country where they are treated as second-class citizens leaves them vulnerable to a hammering when they are then dropped in the deep end of Olympic competition.

How does a 15-0 trouncing, fencing's equivalent of 6-0, 6-0 in tennis, only far quicker, of al-Omair by a Brazilian ranked 80th advance the cause of Saudi women? Will it impress conservative Saudi men whose minds must be changed or simply comfort their view that sport isn't suitable for women? Will it inspire a new generation of Saudi girls to grow up hoping that they, too, might one day have their tails whipped for an Olympic TV audience?

Clearly, as well as opportunities to participate, Saudi women also need the International Olympic Committee to insist that their country guarantee them a fighting chance, with all the facilities and equal opportunities that would require.

Human Rights Watch says progress for Saudi women in sports has been "incremental" since two of them competed for the first time in London. At the Rio Games, there are four Saudi women, although two are already out.

In judo, Wujud Fahmi also was gone in blinks of the eye against a competitor from Mauritius who beat her with bout-ending ippon maneuver seconds into the first round of the women's 52-kilogram competition.

Still to compete are sprinter Cariman Abu al-Jadail in the 100 meters and Sarah Attar in marathon.

According to her web site, Attar lives and trains in California and has completed nine marathons. She ran the 800 at the London Olympics, finishing last and almost a lap behind the winner of her heat in first-round qualifying.

"There is now a generation of Saudi Arabian girls growing up with the possibility of women competing in the Olympics," she wrote in running magazine Like the Wind ahead of the Rio Games. "They see sports and athletic competition as something they can strive towards, and that is incredibly powerful."

Its pre-Olympics report on women's sports in Saudi Arabia spoke of "the profound discrimination that holds back women's and girls' participation."

Women cannot be seen by men while jogging in sweat pants, much less wearing fitted or revealing shorts. Most women cover their hair and face with a veil known as the niqab and all are required to wear a loose black dress known as the abaya in public. Although private women-only gyms and sports clubs are growing in popularity in major Saudi cities, public schools don't offer physical education for girls.

Al-Omair traveled to Rio from the eastern Saudi city of Khobar. Other than that, this petite pioneer leaves as something of a mystery. The Rio Games' information site offers no biographical material about her other than age (29), height (1.52 meters; 5 feet) and weight (45 kilograms; 99 pounds). It lists "athlete" as her occupation.

"Though the Saudi fencer possesses the requisite skill level, she lacks experience in top-level tournaments," the governing International Fencing Federation said in a statement to The Associated Press. "Participation in more regional and international competitions will significantly increase her confidence and be of major importance in her preparations for future events."

Through their meshed face masks, the Brazilian who beat al-Omair, Tais Rochel, could sense the nervousness of her inexperienced opponent.

"She knows the fencing technique, but she was afraid," Rochel said. "In fencing, you cannot be afraid. And I could feel it."

Of course, Saudi women have to start somewhere.

But the Olympics are too competitive, too intimidating, too high profile for those reduced to taking baby steps.

John Leicester is an international sports columnist for The Associated Press. Write to him at jleicester@ap.org or follow him at http://twitter.com/johnleicester