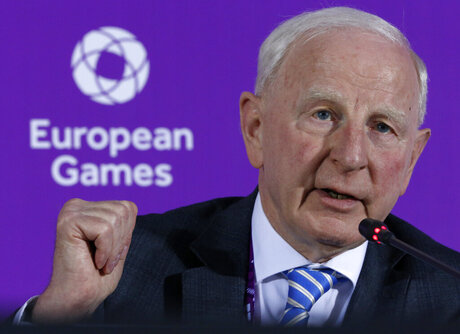 By: JAMES ELLINGWORTH (AP)
MINSK, BelarusCopyright 2020 The Associated Press. All rights reserved. This material may not be published, broadcast, rewritten or redistributed.
53.927.5667

MINSK, Belarus (AP) — The acting head of Europe's top Olympic body said Friday that its president, Patrick Hickey, should be allowed to leave Brazil and return to Ireland because his health is deteriorating and he needs an urgent heart operation.

Hickey is not permitted to leave Brazil, where he was arrested two months ago during the Rio de Janeiro Olympics on ticket scalping charges and awaits a possible trial. Selling tickets at above face value is illegal in Brazil, and authorities promised before the Olympics to enforce the law.

"I am in contact with him personally," acting EOC president Janez Kocijancic told The Associated Press in Minsk. "He's 71. He's not in the best health. I think that the first step should be that he returns home for the heart surgery and the treatment."

"In further procedures, I hope that he will have the possibility to prove his innocence," Kocijancic added.

The IOC said it was not contributing toward Hickey's defense, but also asked for his release on health grounds.

"It goes without saying that the IÓC fully respects the laws and all judicial procedures prevailing in Brazil," the IOC said in a statement to the AP. "But the health of Mr. Hickey is giving the IOC great concern, and has seriously deteriorated over the past weeks. Mr. Hickey requires immediate special treatment in relation to his condition."

"Needless to say that the IOC cannot elaborate on medical details. However, the IOC understands that it would be preferable that the needed treatment is administered in Ireland," the IOC added.

In Rio de Janeiro, prosecutor Marcos Kac told AP that a trial date still had not been set and offered few details.

"As soon as the trial starts, we can give more information," he said.

The law firm defending Hickey — Kamenetz and Marcolini — said in an email that "we do not comment about ongoing cases."

The Irish Independent newspaper published a photo of Hickey arriving at a court in Rio on Thursday, registering as part of the condition of his bail. The newspaper said he did not speak as he entered the judicial proceedings.

In a previous statement, Hickey told the newspaper: "I intend to face all the charges and to fight each and every one of them."

"This has been a life-changing experience for me, my wife, my four children and my five grandchildren and my priority is to recover my health and see my family as soon as possible," he said.

Kocijancic, the acting EOC president, said he believes Hickey is innocent of the charges.

"We studied all the relevant material and from all that we know, he is innocent, he didn't commit any crime," Kocijancic said.

"I don't know if he's guilty or not but I think it's wrong, the things that have been done to him, his rights as a citizen," Danish Olympic Committee general secretary Morten Moelholm Hansen said.

Even Belarusian President Alexander Lukashenko weighed in to defend Hickey.

"There is no proof of any offense," he said, calling the accusations "made up."

Hickey is among 10 people facing charges of ticket scalping, conspiracy and ambush marketing related to the Olympics. He was arrested on Aug. 17 during the Rio Games in a dawn raid on his Rio hotel room.

Hickey's passport has been confiscated, and he must remain in Brazil until the case is concluded.

Police have said that Hickey plotted with businessmen to transfer tickets illegally from a sports company called Pro 10 to hospitality provider THG Sports, which was a non-authorized vendor and allegedly sold them for very high fees. Police investigators said the scheme was planned to bring in $3 million.

The head of THG Sports, Kevin James Mallon, was arrested on Aug. 5 in the case, but was set free, like Hickey. He faces the same charges and must remain in Brazil.